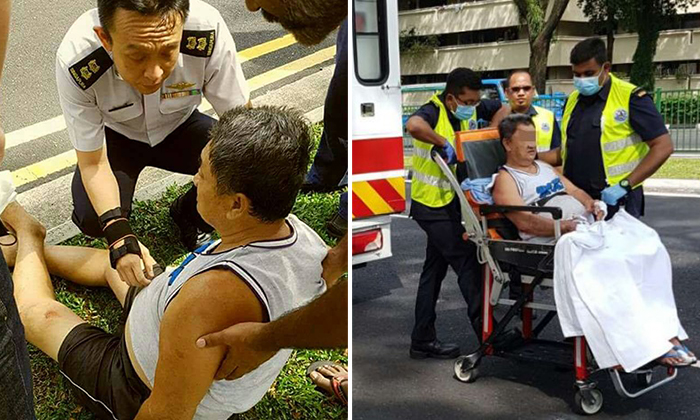 A military doctor, staff from a McDonald's outlet and passers-by earned praise for helping a "cardboard uncle"after he was hit by a taxi at Yishun on Wednesday (Nov 3).

The Straits Times reports that the accident happened at the junction of Sembawang Road and Yishun Avenue 3 at about 2.30pm.

The Singapore Civil Defence Force said that the victim was taken to Khoo Teck Puat Hospital.

A taxi hit Mr Ong, who is in his 60s, as it was turning right, a witness told Lianhe Wanbao.

A driver, Ms Lim, stopped to help Mr Ong, who had abrasions on his shoulder and limbs.

Despite being injured, he was more concerned about his trolley, which had cardboard and plastic bags on it.

"He kept asking where his trolley was, and saying that there were two packets of biscuits on it. It was heartbreaking," Ms Lim told Wanbao.

Besides Ms Lim, others also stopped to help.

A doctor from the Singapore Armed Forces who was passing by, Lieutenant Colonel (LTC) Dr Timothy Teo, helped Mr Ong to the pavement.

"Others did not dare to move him. I checked that he had no spinal injuries or broken bones before I moved him. It was not safe to sit in the middle of the road," he told the Chinese evening daily.

A post shared on The Reservist Facebook page identified the doctor, along with a photo of him helping the "cardboard uncle".

Staff from a McDonald's outlet nearby brought water to clean his wounds, the report said.

"Luckily, many people stopped to help him," said Ms Lim.

Ms Lim and her husband also helped Mr Ong wheel his trolley back to his home.

Mr Ong, who lives with his wife and son, said that he earns about $6 to $7 each day selling cardboard.

It supplements his son's income of less than $2,000 a month.

"I want to help support the family, and get some exercise at the same time," he said.