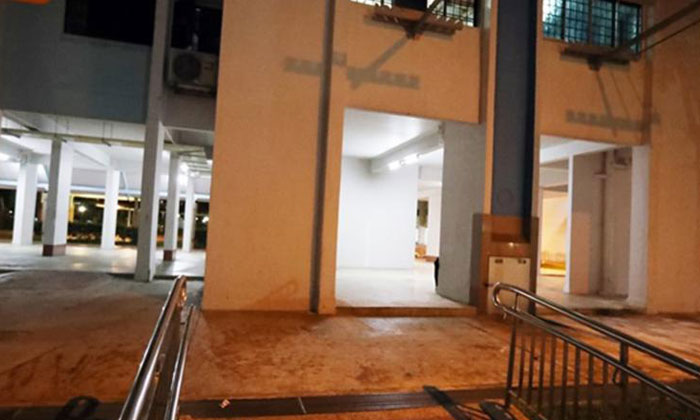 An elderly man was believed to have fallen from the kitchen window of his flat on the 12th floor, after a heated argument with his wife on November 16 at around 6am, reported Lianhe Zaobao.

Though they have been living in the black for close to 30 years, neighbours were not aware that both Mr Ong Chai Seng, 63, and his wife Madam Koh Eng, 66, were married to each other, reported The New Paper.

According to the Chinese newspaper, the duo's marriage had been on the rocks for a long time and they were due to appear in court on Wednesday to undergo divorce proceedings.

The duo could also be heard having heated arguments from their flat on a regular basis.

However, the heated argument between the couple that morning turned the sequence of events around.

The couple got into the argument just before 6am, reported Lianhe Wanbao.

After developing head injuries from the argument, Madam Koh ran out of their 12th-storey  unit shouting, and headed to their daughter's flat on the seventh storey.

However, Mr Ong did not chase after his wife.

Their daughter called the police immediately, but later found Mr Ong lying dead at the foot of the block upon arrival.

Madam Koh had found out about her husband's death only after the police arrived, reported Lianhe Wanbao.

Neighbours had told the Chinese evening newspaper that Mr Ong quit his job as a taxi driver 13 years ago after a stroke.

Due to his condition, he was always seen moving about with the help of a walking stick.

According to all three reports, he was believed to have hit Madam Koh with the walking stick during their fight on Wednesday.

Mr Ong also had a medical history of diabetes and high blood pressure which made him lose a lot of weight in recent years, reported TNP.

A police spokesman told TNP they were alerted to the incident at 5.57am on Wednesday, and that investigations are still ongoing.

The Singapore Civil Defence Force told TNP it sent an ambulance to the scene.

The man was pronounced dead by paramedics and the woman was conveyed to Khoo Teck Puat Hospital.

Aside from her head injuries, Madam Koh also sustained bruises on both eyes and experienced dizzy spells, reported Wanbao.

Doctors suspect she might have a brain injury and have since transferred her to the intensive care unit for further examination.

Related Stories
Man stabs himself over 8 times then stabs tenant too: 'It does not matter if I kill another one or two'
16-year-old British teen hangs herself for fear of being called 'racist' after friend leaks photo of her
Murder-suicide kills 2 at UCLA, shuts down campus
death
suicide
elderly man
argument
heartbreak
love
relationship
marriage