Man stabs himself over 8 times then stabs tenant too: 'It does not matter if I kill another one or two' 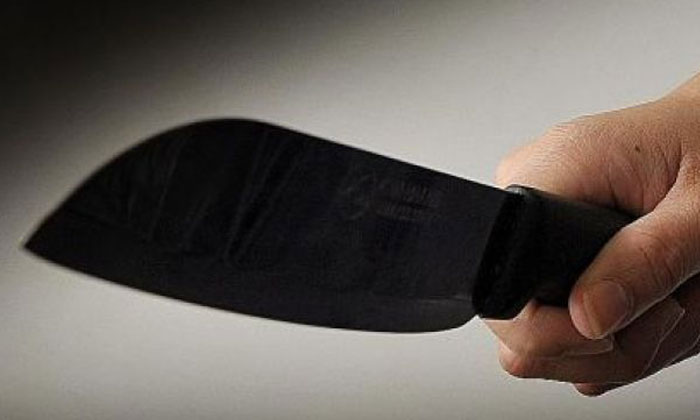 He called the police after attempting suicide by stabbing his chest and neck more than eight times with a knife.

But in an apparent change of mind, Lay Chee Leong, 39, decided that police intervention was not needed any more.

With blood flowing from his wounds, the unemployed man barged into a bedroom occupied by his parents' three tenants and told the terrified women not to open the door should police officers turn up.

Lay, who has substance use disorder with symptoms of psychosis and depression, also threatened to blow up the flat if they disobeyed his orders.

He told the three Chinese nationals: "Since I'm already like this, it does not matter if I kill another one or two."

He then stabbed one of them, electronic component assembler Wang Aiyan, 27, in the neck when she made eye contact with him.

Yesterday, Lay pleaded guilty in court to one count each of voluntarily causing grievous hurt and criminal intimidation.

A second count of criminal intimidation and one count of attempting suicide will be taken into consideration during sentencing.

Assistant Public Prosecutor (APP) Lim Yu Hui said Lay stabbed himself with the knife that had an 11cm-long blade in his parents' flat at Block 273, Yishun Street 22, at around 5.30am on March 23.

He changed his mind after calling the police and entered the women's room after kicking the door several times.

His mother, Madam Chia Mui Keow, 64, tried to stop him but he shouted at her and told her to return to her room.

She did as she was told and called her younger brother, Mr Chia Ah Bah, 59, for help.

While in the women's room, Lay ordered Ms Wang, Ms Liu Weina, 20, and Ms Li Hui, 35, to hand over their mobile phones, and they complied out of fear.

APP Lim said: "He also threatened the victims and told them not to open the door for the police or he would detonate a bomb inside the flat.

"He then directed the victims to clean up the blood stains which he had left on the floor of the room."

When he saw a light flashing on Ms Wang's phone, he thought the women had alerted the police. He told the women that if they tried anything funny, he would fill the flat with gas and blow it up so they would all die together.

Ms Wang nodded her head in response but when she made eye contact with him, Lay stabbed her on the left side of her neck before leaving the room.

Mr Chia had arrived at the unit by then and saw his bloodied nephew holding the weapon.

He took it away and tried to help him clean his wounds.

The police arrived around 7.25am. Lay was taken to Changi General Hospital and discharged the same day, while Ms Wang was rushed to Khoo Teck Puat Hospital (KTPH).

A medical report dated June 10 said her injuries were life-threatening and she was placed on medical leave for 92 days.

Stressing that the offences were serious, she said that Ms Wang now works in administration in her company as she is unable to carry heavy loads because of her injuries.

She also draws a lower salary now compared with what she used to earn.

She is still receiving treatment from KTPH, and has to pay for her own medical treatments such as CT scans.

His lawyer, Mr Napolean Koh, pleaded for leniency and told the judge that his client should be referred to a prison psychiatrist while serving his sentence.

The case has been adjourned for the prosecution to reconsider its sentencing options because of Lay's mental condition. He will be back in court on Dec 15.

For voluntarily causing grievous hurt, he can be jailed up to 15 years and fined, or caned.