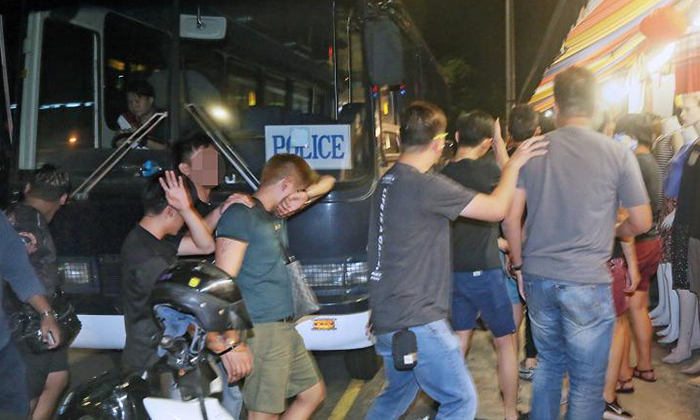 The police arrested 42 people after raiding gambling dens in Geylang on Monday (Mar 20).

The operation which began at around 9pm, lasted for two and a half hours, until 11.30pm, reports Shin Min Daily via Lianhe Zaobao.

During the operation, the police also locked down a 100-metre alley between Geylang Lorong 14 and Lorong 16.

Reporters on the scene, witnessed around 40 people who were seated outside Geylang Lorong 16 , while they were watched by another crowd of around 50 people.

A passer-by told reporters that he saw six cars drive into Geylang Lorong 16 at around 8.50pm, and at least 20 police officers in plainclothes alighted, before proceeding to raid the den:

“I believe there were at least 40 to 50 people in the alleyway at that time, but the officers were so fast, they didn’t have the chance to run.

A resident revealed that illegal gambling trade has been flourishing in Lorong 16 for sometime now, and was worried that customer numbers were on the rise.

The resident also added that even on a regular Monday night, there would be about a hundred patrons gathered in the alleyway.

After arriving at the scene, reporters found that the police had activated at least one bus and three patrol cars, which were used to transport more than 40 suspects to a police station.

There were also at least six bags of phones seized, and two rectangular gambling table.

A spokesperson for the police confirmed that 42 people were arrested, including 41 male and one female, age between 16 years old to 57 years old.

They were arrested for breaching the Common Gambling House Act and Societies Act.