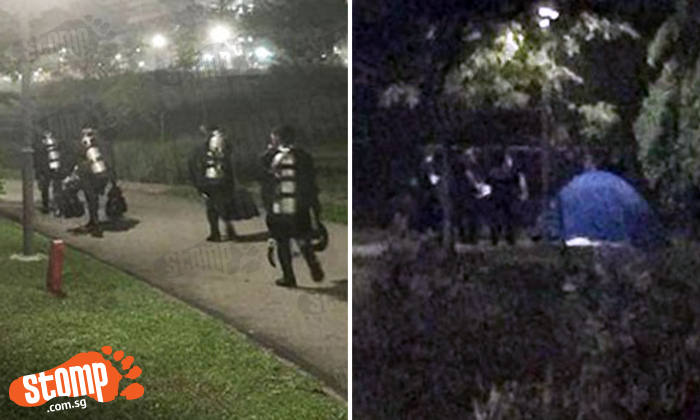 During a police anti-vice operation in November last year at a forested area near Punggol Waterway Park, a 25-year-old man drowned while trying to escape.

The coroner's court heard that police Gurkha Contingent started the anti-vice operation at about 10pm on Nov 24 last year and formed a perimeter around a target area.

While they were moving in to arrest some suspects, a Gurkha officer heard a splashing sound, and then saw Mr Lim about 5m from the shore and swimming away from him.

The policeman alerted his team, and then shone his torch light at Mr Lim and ordered him to return to shore.

Mr Lim turned around and headed towards the officer, but then was seen treading water before totally disappearing underwater.

The officer removed his tactical gear and dived into the water to try to save Mr Lim, but to no avail.

The water was too dark and deep.

Another Gurkha officer also dived into the water to assist him, but to no avail.

The court heard that Mr Lim, who did not know how to swim, worked as a cleaner with Chye Thiam Maintenance.

He was known to have a penchant for prostitutes and liked to talk about women.

Coroner Bay said: "Based on the evidence adduced, there is no basis to suspect foul play.

It is clear from the facts that Mr Lim was never apprehended or handled by the police or Gurkha officers at any time before he took to the body of water.

"The event had occurred in the context of an anti-vice operation in a forested area. The makeshift structures and seized items from the scene included bedding, tentages and condoms, and would give police a reasonable basis to suspect the occurrence of vice activities in the area."

At the time, the police said 13 men and eight women were arrested for wilful trespass on state land, pending investigations.

Mr Bay said: "Given the isolation of the area, Mr Lim's presence and action can only be interpreted to be from an attempt to escape a compromising situation, and evade the police action, by an ill-advised and impulsive attempt to swim across a body of water."

The coroner extended his condolences to Mr Lim's family for their loss.