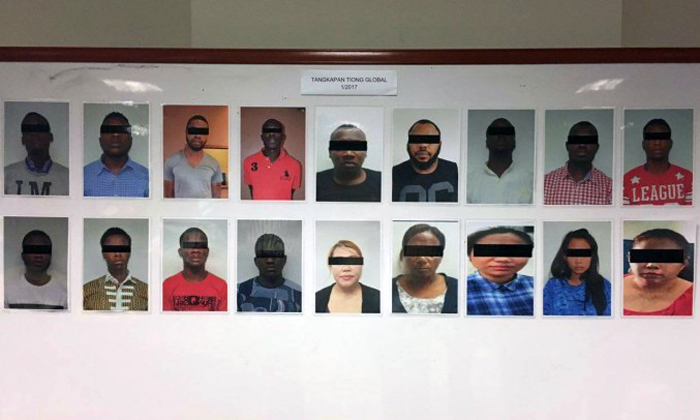 The operation was against cross-border Internet Love Scam syndicates, and was conducted between 6 and 8 February 2017.

The suspects include 13 Nigerian nationals who are believed to be involved in 108 cases of internet love scams reported by victims in both Singapore and Malaysia.

Telecommunication devices, computers and ATM cards were seized from the suspects.

This marks the first successful joint investigation between the two departments against elusive criminals involved in syndicated internet love scams.

During the course of the joint investigation, CAD provided timely information to CCID, allowing CCID investigators to establish the identities of the suspects behind the scams.

While arrest operations were ongoing in Malaysia, CAD coordinated concurrent investigations against 6 female suspects in Singapore for transferring criminal proceeds to Malaysia-based suspects.

Director CAD, Mr David Chew said, “The success of this joint investigation is a testament to the close ties between CAD and CCID.

"Online scams are increasingly complex and transnational in nature.

"To the criminals who think that they could hide behind the cloak of anonymity provided by the Internet to perpetrate fraud, we want to send a deterrent message that crime does not pay.

"I would like to extend my heartfelt appreciation to Director CCID, Dato’ Acryl Sani Abdullah Sani and his officers, for their strong support to CAD in this intensive investigation and enforcement effort.”

Related Stories
Overall crime rate drops, but online love scams hit all time high in S'pore
80-year-old man allegedly involved in multimillion-dollar scam pretended prominent S'poreans were his friends
Man who acted to be in love with cleaner and cheated her out of $57,000 gets 20 months' jail
raid
police
arrest
scam
love scam