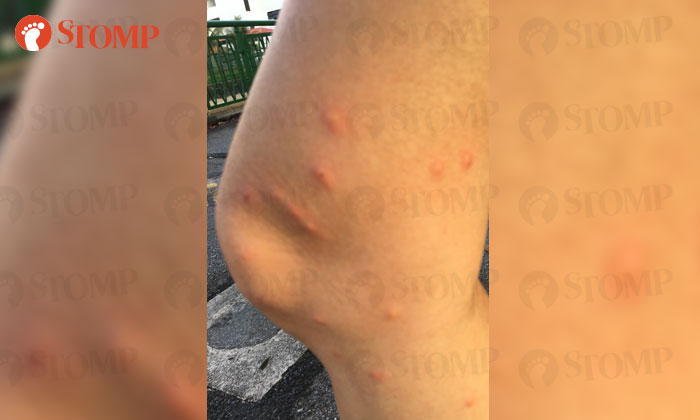 Stomper Yvonne said she suffered itchy bite marks after flying business class with Singapore Airlines from Brisbane to Singapore on flight SQ 246 on May 26.

Yvonne told Stomp in a phone interview that it was a red-eye flight and she woke up from her sleep after feeling a sudden itch on her legs.

According to Yvonne, the bites were made by bed bugs.

"I was wearing pants so I didn't see the bites until I went to the washroom," said the Stomper.

She then went to a stewardess who tended to her and took photos of the bites telling her that she would report the matter and get back to her.

"I waited for a few weeks but did not hear anything from the airline," said Yvonne.

"They then informed me to message them directly so that they could correspond with me via email.

"I received an email from them telling me that they were happy to reimburse my 'basic medical fees' but when I replied for clarification, I received no reply."

Yvonne said that she has been sending emails to the company every week since then and sent her latest email last week, but still hasn't received a reply.

In response to Stomp queries, a Singapore Airlines spokesman said:

"We have been in contact with the customer regarding her experience and take such feedback seriously. During the flight, our crew provided antiseptic wipes and cream to the customer, and there was subsequent follow-up to offer to reimburse medical expenses that she may have had.

"We wish to assure our customers that our aircraft undergo regular cleaning. In addition to cleaning that takes place after each flight, there is a scheduled programme of regular deep cleaning as well as for pest treatment on all of our aircraft."

Yvonne shared her story with Stomp after reading about a woman who claimed she had been bitten by bed bugs while flying on low-cost carrier Scoot between Singapore and Hong Kong.

It has been almost three months since the incident but Yvonne said that the scars from the bites still remain:

"I am unable to wear skirts or shorts without getting questions from friends and looks from passers-by.

"The bites may have dried but the scars may be there to stay."