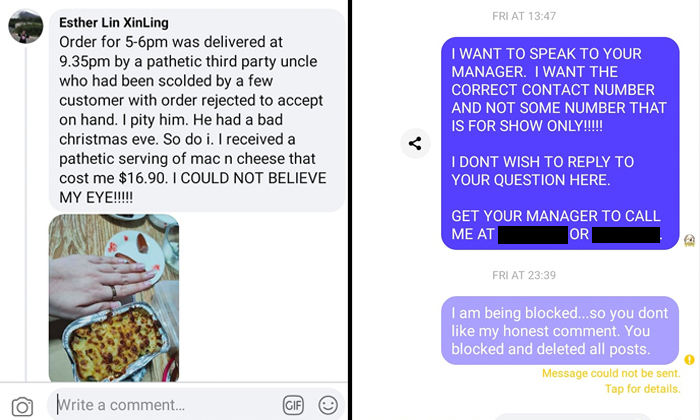 Late or missing orders on festive occasions due to a surge in demand is one thing, but a food establishment in Singapore has been accused of deleting complaints and blocking upset customers on social media.

Many customers did not receive their orders from Shepherd's Pie Singapore on Christmas Eve (Dec 24) as scheduled and took to its Facebook page to express outrage.

"One such company, Shepherd Pie Singapore, who marketed their food packages as delivery in 60 minutes, took in too many orders and were unable to deliver food as promised.

"On Christmas Eve night, approximately 80 comments stacked up on their Facebook page from angry customers. Some did not receive their orders at all and others only got theirs four hours late with the food turned cold.

Ezbon alleged that the company deleted complaints on its Facebook page until "presently almost all the comments have been deleted".

A search of Shepherd's Pie Singapore's Facebook page found no negative comments about the company, no remarks about Christmas Eve and no sign of any dissatisfied customers.

Facebook user Susannah Meria De Silva compiled screenshots showing numerous complaints about Shepherd's Pie Singapore and said it "deleted all the messages below on FB and Instagram and I believe blocked those who commented on FB and Messenger."

Here are all the screenshots:

Similarly, many customers in the screenshots said that Shepherd's Pie Singapore had deleted their comments.

One customer also appeared to have been blocked on Facebook Messenger by the company after expressing his discontent.

In a statement on Thursday night (Dec 24), Shepherd's Pie Singapore attributed the delivery lapse to an "unforeseen event" involving its oven.

Dear Valued Customers, Thank you for your overwhelming support during this festive season! We would love for you to...

It said: "Thank you for your overwhelming support during this festive season! We would love for you to have a taste of our delicious Shepherd's pie; however, due to an unforeseen event our oven has failed on us and we're working tirelessly to fix it in the next 2-3 days.

"We sincerely apologise for orders that we had to refund, as well as your frustration towards our service. We are working to smoothen our service and delivery and we promise to get back to each and every one.

"Do note that most recent orders will be refunded as a result. We hope to get it up and ready by the end of the week to continue serving up more delicious food!

"Thank you for your kind support and have a Merry Christmas!"

And while there are no negative comments on the post itself other than someone who said, "nice food", the 'shares' on the post show how some netizens feel about Shepherd's Pie Singapore's response.