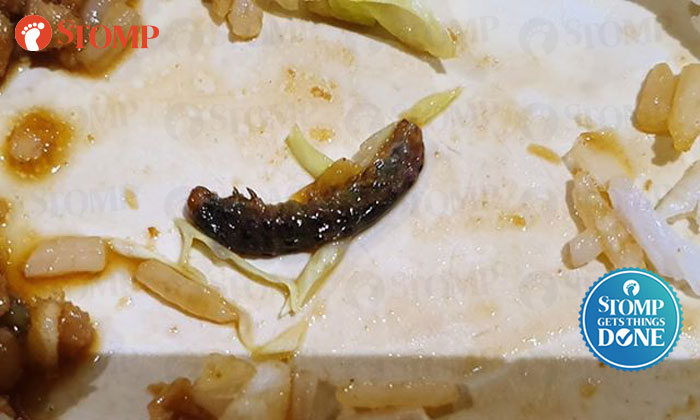 The Singapore Food Agency (SFA) told Stomp it will be taking enforcement action against a Thai food stall at Bedok Interchange Hawker Centre after a man found what he described to be a worm in his meal.

Stomper Bhavesh told Stomp that he had visited the stall to buy himself dinner on Sep 24. He ordered Thai basil chicken and egg fu yong.

"Halfway through eating the chicken, I found a worm," he said.

"At first I thought it was a fish scale but I looked closer and saw legs.

"The egg fu yong also had egg shells in it but I just kept quiet about it.

"When I went to inform the stall operator, she was really disrespectful and not apologetic.

"I demanded my money back but she refused so I shouted and made a big hoo-ha."

Bhavesh added that he threw up afterwards.

"I forced myself to vomit as I was so disgusted," he said.

"The hygiene was quite bad.

"If she had said sorry I could have closed one eye but there were no apologies."

In response to a Stomp query, a spokesman from SFA said they found a hygiene lapse after inspecting the food stall.

She said: "SFA received feedback on a worm allegedly found in a plate of basil chicken rice bought from a food stall at Blk 208B New Upper Changi Road hawker centre.

"Upon inspection of the food stall, we found a hygiene lapse.

"SFA will take enforcement action against the operator for this lapse.

"We have also reminded the operator to ensure proper food preparation practices and that there is no contamination of foreign matter or insects in the food sold.

"Food safety is a joint responsibility.

"Food operators are required to adhere to good food hygiene and preparation practices.

"SFA conducts regular inspections of food retail establishments to ensure compliance with hygiene standards, and will not hesitate to take enforcement action if necessary.