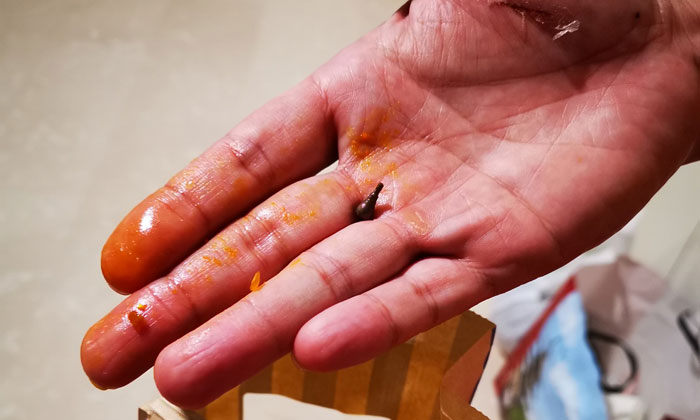 The Singapore Food Agency (SFA) told Stomp in a statement that it has inspected a Garrett Popcorn shop outlet and the brand's central kitchen after a man allegedly bit into a screw found in a packet of popcorn on Aug 1.

She said her husband was indulging in the gourmet popcorn snack bought from the outlet in Raffles City when he bit down on something hard.

"Thinking at first that it was just an unpopped kernel, he finally spit it out and we were horrified to see that it was a METAL SCREW instead!"

She added that it was fortunate her husband had spit out the screw instead of swallowing it.

He subsequently went to get a tetanus shot from the doctor and have his teeth checked in case he had fractured his tooth.

"Just imagine if it had been a young child or an old person instead - HORRORS!"

In response to a Stomp query, an SFA spokesman issued the following response:

"SFA received feedback of a metal screw found in a packet of Garrett popcorn.

"We have inspected the food outlet and central kitchen, which supplied the packets of popcorn, and did not detect any lapses.

"This could be an isolated incident.

"Nevertheless, we have advised both the operators of the food outlet and the central kitchen to ensure proper food preparation practices and that there is no contamination of foreign matter in the food sold.

"Food operators are reminded to adhere to good food hygiene and preparation practices.

"SFA conducts regular inspections of food retail establishments to ensure compliance with hygiene standards, and will not hesitate to take enforcement action if necessary.