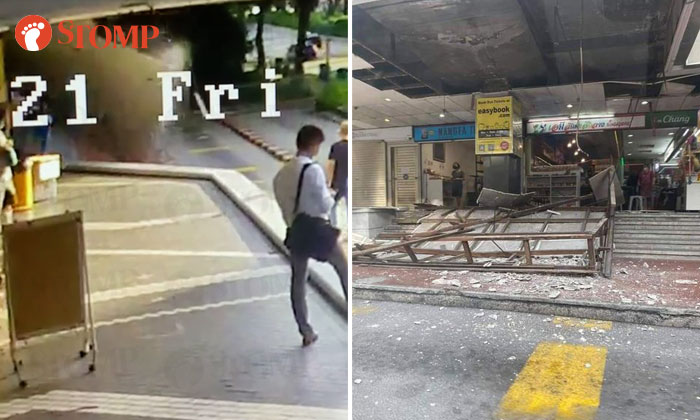 Part of the false ceiling near the entrance of Golden Mile Complex in Beach Road collapsed on Friday evening (April 23).

A large section of ceiling boards affixed to a wooden frame, nails exposed and other debris were seen strewn across a section of the stairs near the taxi stand, but no injuries were reported.

An eyewitness told Chinese-language daily Lianhe Wanbao that she had heard the sound of something breaking shortly before the ceiling area collapsed.

Electrical wires were seen exposed in the gap of the ceiling, according to photos shared by passers-by.

A video of the incident circulating online showed large pieces of the ceiling falling suddenly.

When contacted, a spokesman for the Singapore Civil Defence Force said that it was not activated for any incident at the shopping centre.

Both Wanbao and Chinese paper Shin Min Daily News reported that the area where the incident took place was cordoned off and workers were seen cleaning up the rubble later in the evening.

Workers were also seen using torchlights to examine the part of the ceiling from where the boards had fallen.

Responding to queries from The Straits Times, a Building and Construction Authority (BCA) spokesman said its engineers were on-site on Saturday following the incident.

They observed that the anchor rivets holding the steel hangers and timber frame of the false ceilings had dislodged from the supporting concrete slab above and noted that there was no damage to the main building structures.

BCA has instructed that the affected area directly below the fallen false ceiling to be cordoned off as a safety measure.

The authority has also instructed the building owner to appoint a professional engineer to carry out a detailed investigation of the incident, assess the condition of the ceiling structure and to carry out permanent rectification measures recommended.

Wanbao reported that Friday's incident and another episode last year, where the ceiling in the women's washroom on the second floor of Golden Mile Complex collapsed, have raised safety concerns among retailers and patrons at the mall.