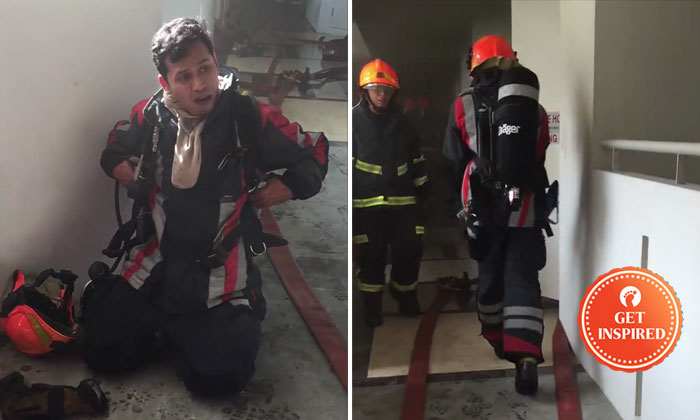 Singapore Civil Defence Force (SCDF) firefighters are being commended online for going beyond the call of duty to rescue 4 cats that were trapped in a Woodlands HDB flat that had caught fire on Sep 22.

The incident happened at Block 886B Woodlands Drive 50.

A video was posted of one of the officers grabbing breathing apparatus from his colleague in order to go back in to save the pets.

After saving the cats, firefighters performed CPR on the felines.

However, two of the cats died from smoke inhalation.

The other two survived and were sent to the vet.

A resident of Block 886B, Zul Monsor, took to Facebook to express his gratitude to the SCDF officers who helped.

"Clearly you and your team did it with compassion, responsibility and honour. Very honourable deeds that only AlMighty can repay. Keep up the good work. Salute." he wrote.

It is also heartening how the neighbours of the family affected by the fire have rallied together to raise funds for them.

Although the fire was put out and no person was injured, most of the family's belongings were charred and destroyed.

Neighbours and friends of the family have made calls for donations via bank transfer, in person or in a tin that is located outside the unit on the sixth floor to help the family rebuild their lives.