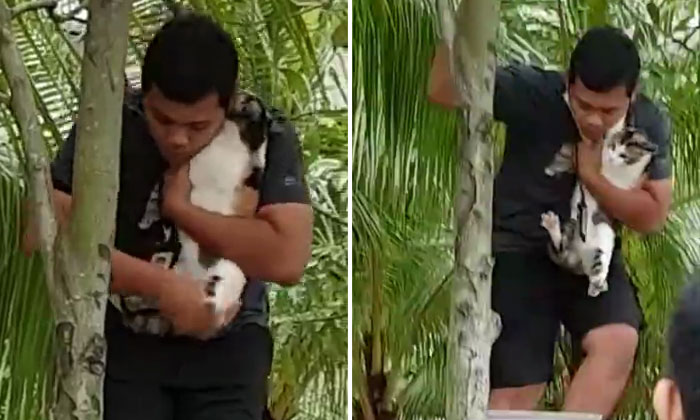 A Land Trandsport Authority (LTA) Enforcement Officer came to the rescue of a cat that had gotten itself trapped in a tree.

The Cat Welfare Society posted a video of the rescue on its Facebook page, contributed by cat lover Arii.

Arii had been heading to work last Wednesday (Oct 26) when he came upon the scene.

"A terrified cat was stuck in a tree, and the hero of the day was a young LTA enforcement officer (active mobility) who got a ladder and promptly climbed up to soothe the scared kitty.

"The cat must have sensed that help had arrived and it didn’t take long before the officer scooped the cat up in his arms!

"I was touched by how patient and calm he was towards the stressed cat, and I think it’s commendable that he went above and beyond his job scope to rescue an animal that needed his assistance!

Other passers-by were commended for helping out as well.

The officer had borrowed the ladder from a provision shop nearby and two onlookers helped to support the ladder while he climbed up to rescue the cat.

Thanks to these kind-hearted Singaporeans, the cat was reunited with its furry friend, another cat who was waiting for it nearby.

The Cat Welfare Society appealed for the identity of the LTA officer.