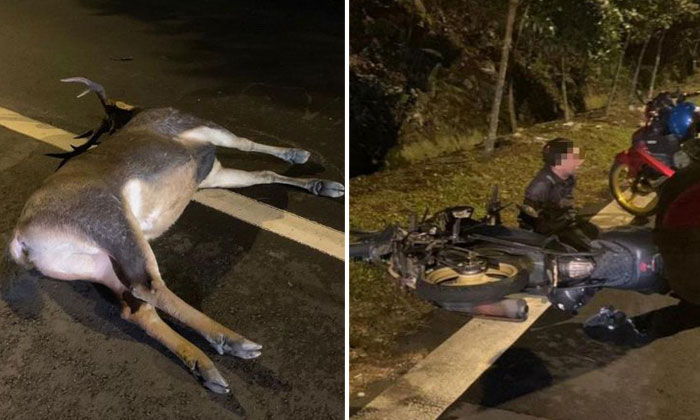 A wild sambar deer died in an accident with a motorcyclist along Mandai Road on Tuesday evening (Dec 18).

According to The Straits Times (ST), the rider suffered multiple abrasions but refused to be taken to hospital.

A reader shared photos with ST showing the deer lying dead on the road.

In another photo, the rider is seen sitting next to his motorcycle which is lying on its side.

In a photo that was not published, the deer is seen with its eyes open and a pool of blood foaming at its mouth.

The police said they were alerted to the accident at 8.10pm.

As the deer was already dead, Acres did not attend to the case. It referred the caller to the National Environment Agency, which typically disposes of carcasses in such situations.

Mr Kalai said: "Mandai Road has forested areas on both sides. Sometimes, when the deer crosses the road, this can happen."

Also known as sambaur deer, they eat leaves, fruits and bugs. Males can grow up to 2m tall including antlers, and weigh up to 260kg, while females are two-thirds the size of males or smaller.

They can live up to 20 years in the wild.

Related Stories
Deer wanders in circles in the middle of Lornie Road
Deer involved in accident with 3 vehicles at BKE, taxi driver sent to hospital
Driver narrowly misses wild deer that dashes in front of his vehicle near Mandai Rd
More About:
deer
accident
animal
motorcyclist