Deer involved in accident with 3 vehicles at BKE, taxi driver sent to hospital 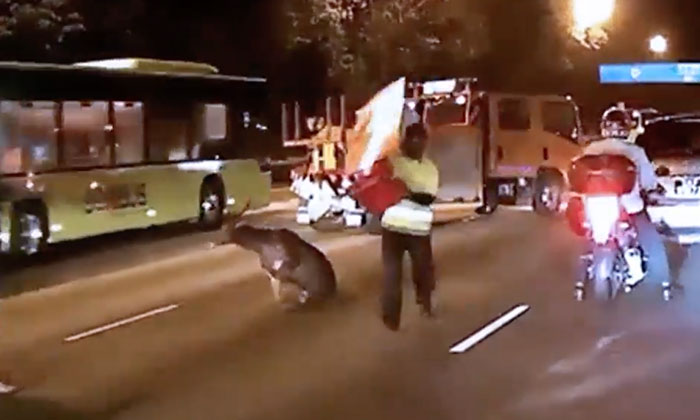 An accident involving a sambar deer, and three vehicles -- a taxi, a car and a motorcycle -- on the Bukit Timah Expressway happened on early Sunday morning (June 17).

The police told Stomp that it was alerted at about 4.40am to the accident which took place on the BKE towards the Pan-Island Expressway (PIE). The taxi driver, a 46-year-old man, was conscious when he was taken to the Ng Teng Fong General Hospital.

Stomper Diablo was on a public bus when he came by the site of the accident at about 5.35am.

"There was a jam and then I saw a deer resting in the middle of the road.

"I think its right antler was broken. I was quite amazed. How did a deer end up here in the middle of the road?

"At first I thought it had escaped from the zoo since the highway was close to Mandai. I later found out through the news it was a wild deer."

As the bus drove on, Diablo then saw a white Toyota car, visibly damaged.

"I didn't see the driver though, so I'm not sure if anyone was injured."

A video of the accident was uploaded on SG Road Vigilante’s (SGRV) Facebook page which shows a deer sitting on the road.

The animal appears to be struggling to get to its feet.

A white trailer truck and another tow truck are also seen at the site.

A tweet was sent out by the Land Transport Authority (LTA) at about 5am , urging motorists to avoid the first to third lanes on the BKE due to an accident.

Accident on BKE (towards PIE) after Mandai Rd Exit. Avoid lanes 1, 2 and 3

Stomp understands that the accident had occurred as the motorists were attempting to avoid the deer which had run onto the expressway, and none of the three vehicles had hit the deer.

The motorcyclist believed to be the first of the three to reach the deer and he stopped to avoid the creature.

The taxi driver who was behind the motorcyclist had to cut into another lane to avoid hitting him, leaving no time for the car driver behind him to react to the sudden manoeuvre, causing a collision.

Mr Kalai Vanan, deputy chief executive officer of Animal Concerns Research and Education Society (Acres) said that a wildlife rescue team was dispatched to the location after being alerted to the incident at about 5am.

However, he added that the condition of the deer was not optimistic:

As the animal was quite large, a team of the Wildlife Reserves Singapore had to be activated at about 7.30am to contain it.

Mr Kalai said that a cloth was used to cover the deer's eyes to keep it calm.

He said that the animal suffered cuts on its body but more tests are needed to ascertain whether it had suffered internal injuries as well as the severity of the injuries.

Mr Kalai also said that the sambar deer, which usually dwells in forests, is unlikely to survive.

He added that the animal may have been injured during other traffic accidents but it would be hard to determine what exactly happened to cause the animal to end up on the roads.