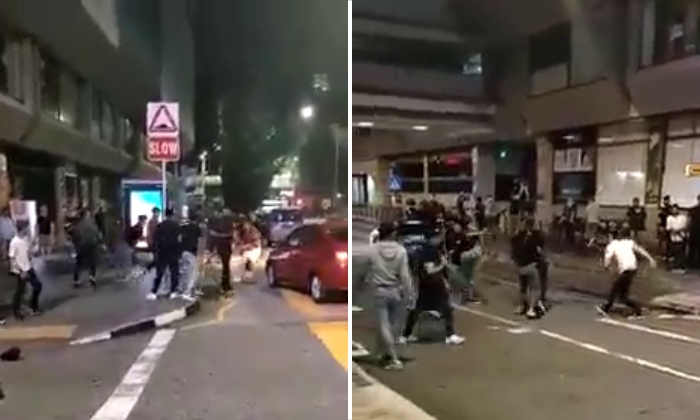 Three men, aged between 22 and 30, were arrested for rioting after allegedly being in a brawl involving about 20 people outside Orchard Towers early Sunday morning (Aug 14).

Police said they were alerted to a case of a fight along Orchard Road at about 5.15am. All the suspects had fled before the police arrived at the scene.

Through follow-up investigations and with the aid of images from police cameras and CCTV footage, officers from the Criminal Investigation Department and Tanglin Police Division established the identities of the three men purportedly involved in the fight and arrested them.

The police also identified two men, aged 20 and 30, who are believed to have been attacked during the fight and had sustained minor injuries.

Let’s celebrate before the closing down of all the night spots in orchard tower!!

A 14-second video of the incident circulating online shows two separate groups of people punching and kicking each other with netizens calling it a "royal rumble".

Some joked that the rioters were celebrating before the closure of the night spots in Orchard Towers. Others pointed out that disturbances like this were why those night spots are being shut down.

Operators at Orchard Towers were informed last month that their Public Entertainment Licences will not be renewed beyond May next year, reported The Straits Times last week. Citing law and order issues, the police said 12 commercial units are affected.

"The law and order situation in Orchard Towers remains of concern, and has not improved over the years," said a police spokesman on Friday (Aug 12).

"There has been a consistently high volume of and strong feedback from nearby residents and neighbouring developments on concerns over public safety, vice activities and nuisance contributed by the presence of nightclubs and bars at Orchard Towers."

The three men arrested for Sunday morning's incident are to be charged in court on Tuesday (Aug 16) with rioting, which carries an imprisonment term of up to seven years and caning.

"The police will not tolerate such brazen acts of violence and blatant disregard of the law. We will spare no effort to apprehend such offenders and deal with them in accordance with the law," said police.

Related Stories
Man staggers and falls after being kicked in crotch, punched in head at Hougang void deck
Woman throws chair at another over getai seat, gets punched 3 times until her face is bloody
Man attacked and dragged by his legs after pulling woman's hair in Geylang fracas
More About:
fight
arrested
riot
Orchard Towers