Woman throws chair at another over getai seat, gets punched 3 times until her face is bloody 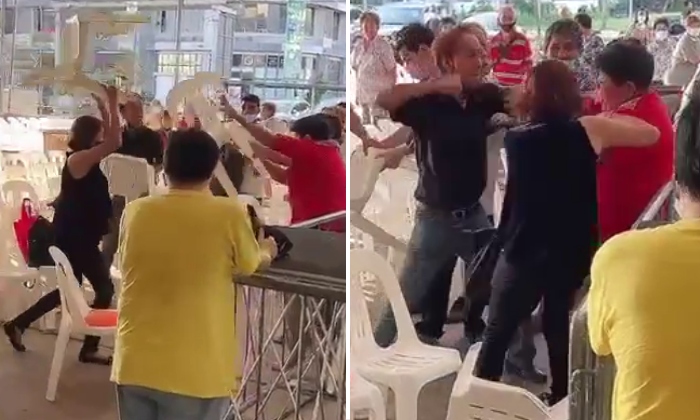 A man punched a woman repeatedly until her face was bloody after she threw a chair at another woman in Ubi on Wednesday (Aug 10). Three people were arrested.

At least two videos were posted online of the incident, which took place in front of a getai stage in Lorong Koo Chye Sheng Hong Temple Association at 15 Arumugam Road.

One video starts with three people holding up white plastic chairs with a man in black facing off a short-haired woman and another man.

The woman in black dropped her chair and started hitting the short-haired woman with her bare hands while others came to take away the chairs from the two men.

As the two women tussled with each other, the man in black stepped forward and punched the short-haired woman in the face three times before he was pulled away.

Others tried to separate the two women as the short-haired woman, whose face was now bloody, held on to the other woman's blouse.

After they were finally separated, the man in black and the woman in black walked away together holding on to each other as another man held back the short-haired woman.

What could have caused the fight?

The short-haired woman told Shin Min Daily News that she was at the place since 11am that day and wanted to save a seat for her friends. She said the couple in black arrived at 5pm and without asking her, threw away a coffee and bread she had left on the seat so that they could sit. That was how it started.

"I am not in the wrong," she told the Chinese evening daily. "They also fought back. I was beaten until I shed blood. Then I called the police."

She had two stitches on her face at the hospital.

In response to a Stomp query, the police said that they were alerted to a case of a fight along Arumugam Road at 5.57pm.

A 69-year-old man and two women, aged 65 and 71, were arrested for affray. The 71-year-old woman was conveyed conscious to the hospital, said police.