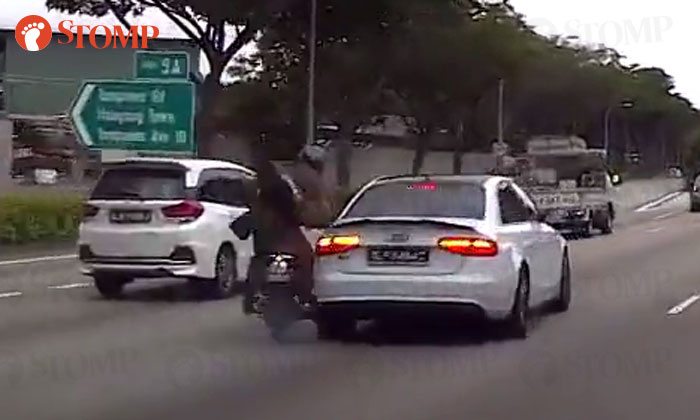 A 39-year-old motorcyclist was taken to hospital after he crashed into an Audi that had cut in front of him along the Kallang-Paya Lebar Expressway (KPE) on Saturday (Dec 7).

Stomper Lawrence witnessed the incident and shared footage from his in-car camera with Stomp.

"The white Audi driver tried to cut across three lanes just ten metres away from the slip road, causing the rider to slam into his car," he said.

"Hopefully, this video will help the poor motorcyclist to strengthen his case."

In response to a Stomp query, the police said they were alerted to an accident involving a car and a motorcycle along the KPE towards the Tampines Expressway at about 2.43pm.

"The motorcyclist, a 39-year-old man, was conscious when conveyed to Sengkang General Hospital," a police spokesman said.