Rider taken to hospital after car pushes another car in front of van, causing motorcycle to rear-end it 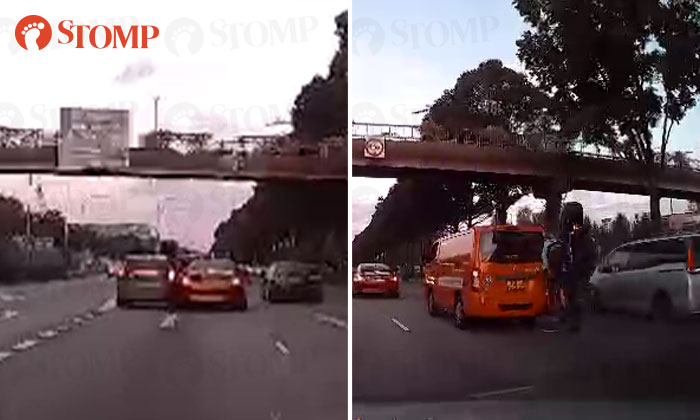 A 54-year-old motorcycle rider was taken to hospital after he rear-ended a van and flipped off his motorcycle along the Ayer Rajah Expressway (AYE) on Wednesday morning (Sept 14).

In a video shared by a Stomper, it appears that two other vehicles had a role to play in the incident.

In the clip, a car is seen aggressively pushing another car into the path of the van while changing lanes.

This causes the van to come to a sudden stop and the motorcycle to subsequently crash into its rear.

The rider is seen landing face-first onto the road.

He said: "Let's not assume... but what are you doing, driver?

"Unlucky van driver and the motorcyclist's unfortunate chain of events due to the car driver's persistent lane changing.

"I hope the Traffic Police look into this case with this video uploaded for how and why."

In response to a Stomp query, the police said they were alerted to the accident at 7.06am.

"A 54-year-old male motorcyclist was conveyed conscious to the hospital," a police spokesman said.