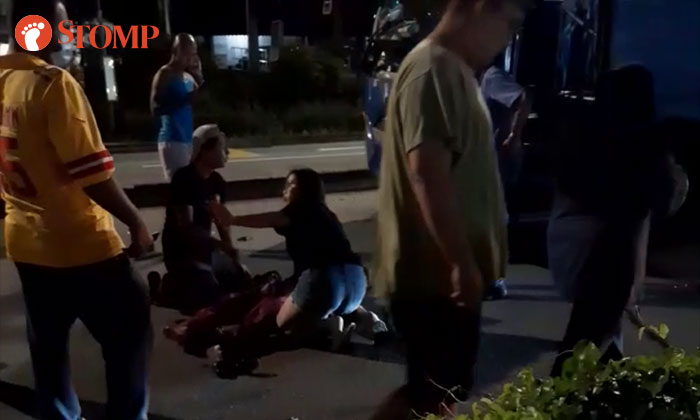 A motorcyclist and his pillion rider were taken to hospital after the motorcycle they were riding was involved in an accident with a bus along Yishun Ring Road in the early hours of Wednesday morning (Sept 14).

Stomper Rizzy alerted Stomp to the incident and shared a video he took at the scene.

In the video, a woman is seen lying on the ground and shouting in pain. She is surrounded by several bystanders offering assistance.

"It happened at about 1am," said Rizzy who took the video while he was on his way home.

"The police and an ambulance were called right after the accident happened.

"I was just a few metres away from the spot of the accident.

"A lady who seemed to be the pillion rider was lying on the road.

"The rider suffered only minor injuries."

In response to a Stomp query, the police said they were alerted to the accident at about 1am.

"A 37-year-old male motorcyclist and his 35-year-old female pillion were conscious when conveyed to the hospital," a police spokesman said.