Boy, 12, hit by car in Choa Chu Kang was supposed to sit for PSLE this week 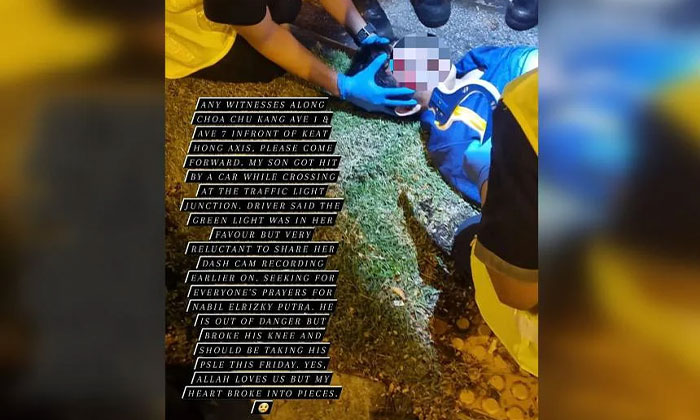 A 12-year-old boy who was hit by a car on Sunday evening in Choa Chu Kang is in stable condition and responsive, according to his mother.

Identifying herself only as Madam Nora, 39, she told The Straits Times on Tuesday that her son, Nabil Elrizky Putra, had just undergone surgery on his knee but was conscious.

"He's just a bit drowsy now because of the surgery," she said.

The police said in a statement that they were alerted at 7.43pm on Sunday to an accident involving a car and a pedestrian in Choa Chu Kang Avenue 7.

The Singapore Civil Defence Force said that Nabil was conscious when he was taken to the National University Hospital.

Madam Nora, an administrative worker, said she often accompanied her son on his weekend visit to her father's home, located across the road from her own flat in Choa Chu Kang Avenue 7.

"But as I had a fall earlier that Sunday, he went alone to his grandfather's house and was on his way back home after that (when the accident happened)," she added.

She said she and her relatives were initially worried as Nabil had also suffered a head injury, but he is now out of danger.

"So far, he has no internal injuries... but I will monitor his condition over the next few days," said Madam Nora.

She added that her son is supposed to sit the Primary School Leaving Examinations on Friday and she has alerted the school about his accident.

"If he is fit enough, he will take his papers. If he hasn't recovered enough by then, he will skip the examinations, and his results from the preliminary exams will be used instead," she said.

Madam Nora added that she was appealing to the public for witnesses.