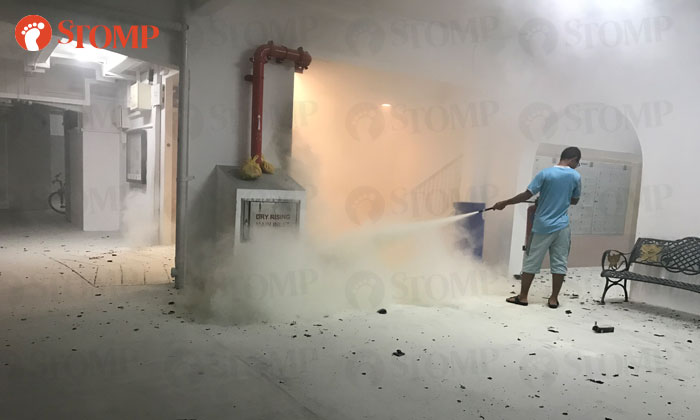 A fire broke out at the lift lobby of Block 696 Hougang Street 61 in the early hours of Wednesday morning (Feb 13).

Stomper Yamin, a resident at the block, alerted Stomp to the incident and shared a video he took at the scene.

"I heard a loud bang as I was walking home," he told Stomp in a phone interview.

"I then rushed to see what had happened.

"Several pieces of debris had scattered around the area.

"Another resident was there with a fire extinguisher trying to put out the flames.

"The fire was quite big before I started recording."

In the video, smoke can be seen filling the void deck of the block.

In response to a Stomp media query, the Singapore Civil Defence Force (SCDF) said that they responded to the fire at about 1.45am.

"The fire involved discarded items at a lift lobby," a spokesman said.

"It was extinguished with one hose reel."