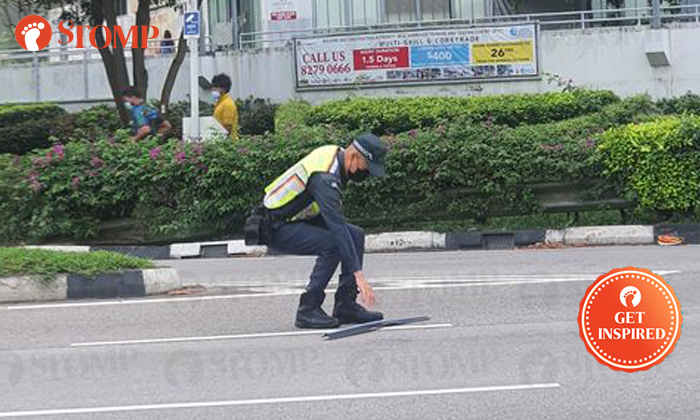 An on-duty auxiliary police officer who was seen helping to clear the road of metal poles that had fallen off a truck has been identified and lauded by Certis.

Stomper Masnoh earlier shared how he saw the Certis officer picking up metal trunking along Gambas Avenue on Thursday morning (May 27).

Masnoh said the metal trunking had fallen off a truck that did not stop after the incident, and praised the officer for keeping our roads safe.

The auxiliary police officer has been identified as Lance Corporal Francis Lim, who was part of a team of officers carrying out enforcement duties on personal mobility devices (PMD) at the junction of Gambas Avenue and Woodlands Avenue 12 that day.

A Certis spokesman told Stomp: "Francis was on duty at around 7.30am when he heard some loud clanking sounds of metal coming from the other side of the junction.

"He realised that close to 20 metal poles had fallen off a truck while it was making a turn.

"By that time, the truck had already left the location before he could stop the driver, so he decided to take immediate actions and clear the poles in the middle of the road as a safety precaution.

"Certis is proud in the prompt actions and personal initiative displayed by Lance Corporal Francis in this situation. He has displayed the qualities instilled in our officers and went beyond his duties.

"Though they are trained to always be ready to react to different situations, you can never be prepared for every possible scenario, and have to think on your feet and react decisively."

Recounting the incident, Francis shared: "My first thought was the danger that these poles will pose to drivers and motorcyclists, especially during the peak hours where traffic is heavy."

He informed his team leader before quickly proceeding to move the poles to the traffic island.

Francis, who feels that it was a small action on his part to prevent a possible serious accident, said: "I didn't think much of it, I am only doing what I can in ensuring the safety of road users.

"Nonetheless, I am glad that my actions have been appreciated."