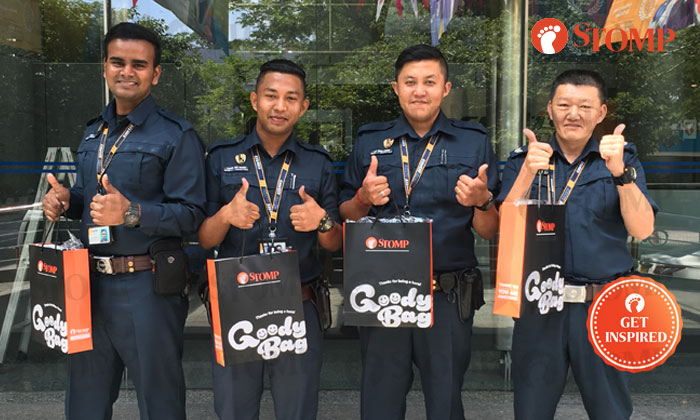 Five Certis CISCO officers were presented with Stomp Goody Bags for assisting a cabby whose taxi had broken down at a busy road junction along Geylang Road.

Stomper Kavisharuman had alerted Stomp to the kind act that took place at around 2pm on Aug 23.

In a video he sent, two officers can be seen pushing the taxi while two others helped direct traffic.

A fifth officer was involved in the rescue of sorts, but he cannot be seen in the video.

With the help of Certis CISCO, Stomp tracked down the five uniformed personnel who helped the stranded cabby.

We spoke to four of the good-hearted individuals at the Certis Cisco headquarters on Aug 25. CPL Kong was ill on that day, and was not present.

During our chat, CPL Sng, the most senior member of the group with 28 years of service under his belt, said that the first thing that came to his mind after seeing the stationary taxi was 'danger'.

He said that traffic was heavy at that point of time, and something had to be done to help the cabby out of his predicament.

Thereafter, he assigned his peers to take charge of different duties.

He and CPL Kong helped to push the taxi to the side of the road, while PCs Liew and Chong were deployed to direct traffic.

PC Sugan watched over the group's vehicle as the recovery efforts were going on.

The officers then left and resumed with their original assignment after making sure that the cabby and the vehicle were out of harm's way.

The quartet were unaware that they were filmed until they were alerted to the video by their colleagues.

"We never noticed there was a video taken. We only came back after our job, and some of our officers shouted at us or screamed at us 'oh you are hero la'. We were shocked," said Corporal Sng.

The praises and congratulatory messages kept coming in following the incident, and the officers admitted feeling a little shy about being at the receiving end of all the compliments.

PC Liew however, also added that he is spurred on by the commendations he received.

"We also feel motivated because at least we did a good job," he said.

On several occasions throughout our meeting, Corporal Sng emphasised that the team has the interests of the public at heart whenever they are out on assignments.

He takes pride in building rapport with the individuals he comes across in the line of duty.

The 48-year-old veteran said with gusto:

"We try to be good to them, or maybe lend a helping hand whenever we can."

In recognition of their efforts, the officers were presented with Stomp Goody Bags.

We hope that their actions will inspire others to do the same in future.

Have a look at our interview with the four Certis CISCO officers in the video below.

Stomp presented the Good Samaritans with 'Goody Bags' for setting good examples, as part of our efforts to recognise everyday heroes and highlight heartwarming deeds.