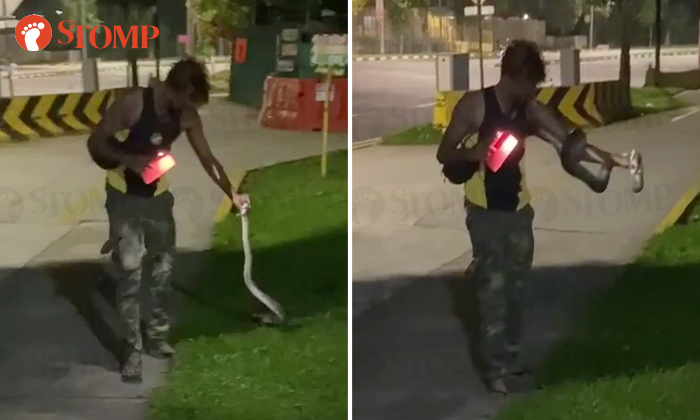 A man was seen picking up a python with his bare hands on Friday night (Nov 12) – a move that has been slammed by the Animal Concerns Research and Education Society (Acres).

Stomper Thajudeen shared a video of the incident that occurred outside Admiralty Park at around 10.40pm.

He said: "We saw a python near the park and called the police. But before anyone came, a man went to catch the python himself and we all got scared."

In the video, onlookers can be heard screaming as the man picks up the python from the grass patch using his bare hands.

The reptile is then seen wrapping itself around the man's arm.

Thajudeen added: "The man should not have touched the python as it might have hurt him and caused danger to him.

"What if if he threw the python to another place where people were playing/walking? That would have been even more dangerous.

"I was waiting until the relevant agency came to the scene to ensure public safety. But since I came to the park with my kids, I moved away from the scene and am not sure what happened to the python in the end."

Acres' deputy chief executive officer, Mr Kalai Vanan, said that the snake in the video is a reticulated python and likely came out from Admiralty Park.

He told Stomp in response to queries: "We do not encourage public to handle such situations themselves. Such irresponsible handling would not only get people hurt, but also cause unnecessary stress and injury for the snake.

"Reticulated pythons are common in Singapore. Being nocturnal in nature, they are more active at night as they seek out prey like rats.

"While these pythons are relocated by Acres daily in many circumstances, they can be left alone if they are near park connectors or parks.

"As we green our city even further, it is important that we learn to co-exist with these animals when near a green space."

Members of the public who see a wild animal in distress may call Acres' 24-hour hotline at 97837782.