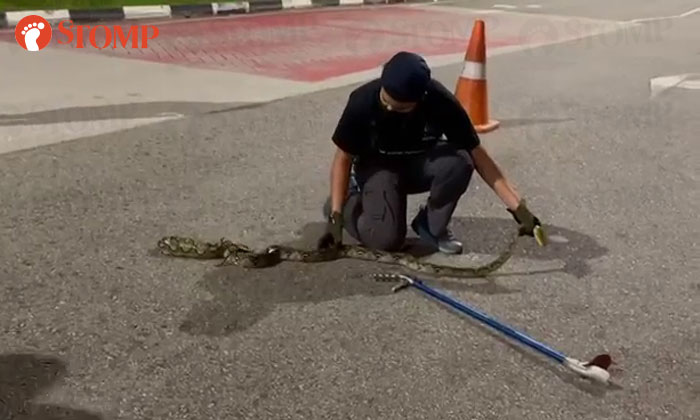 The Animal Concerns Research and Education Society (Acres) and police were called in after a python was spotted outside Corporation Primary School on Friday (Nov 5).

Stomper Aileen alerted Stomp to the incident and shared a video of the Acres rescue team at the scene.

In the video, two team members are seen trying to contain the snake in a white bag.

The python manages to break free through a hole before it is safely placed in another bag.

"I was shocked and surprised to see a wild python by the roadside," said Aileen.

In response to a Stomp query, co-chief executive officer of Acres Mr Kalai Vanan Balakrishnan said the Acres 24-hour wildlife rescue team received a call regarding the python at about 12.40am.

"As the snake was seen making its way across the road, the police were called in as well to assist in guiding traffic," he said.

"When our team reached, our rescue officers noticed that the snake was lethargic, but once we started to restraint the snake, it behaved normally.

"We did not notice any injuries on the snake.

"The reticulated python will eventually be released back to the wild.

"Pythons are one of the common reptiles found in Singapore.

"They are generally shy and are often found in residential areas as they are drawn to the abundance of rodent prey like rats.