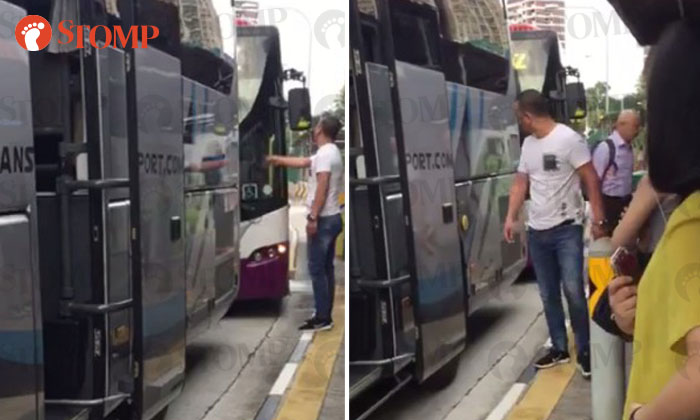 The driver from Premium Bus Services was captured on camera shouting in retaliation at an SBS Transit driver after he was honked at this morning (Jan 11) at a bus stop near Bishan Park Secondary School.

Stomper Alex captured a video of the dispute at about 8.05am when she was waiting for the bus to go to work.

The Premium Bus Services driver, who is in a white t-shirt and jeans, can be seen shouting and pointing at the bus driver inside the public bus.

He stands next to the front door of the bus and yells.

After a while, a bystander diffuses the situation by putting his hand on the driver's shoulder gesturing for him to return to the silver bus.

The video ends with the driver complying and walking back into the bus.

In response to a Stomp query, Commute Solutions Pte Ltd, the company which Premium 588 bus service is under, said: "From our understanding from the driver of Premium 588, he was honked at three times by the SBS bus service 52 driver when he was doing his routine pick-up at the bus stop.

"Our buses would usually do a brief pick-up at designated bus stops before moving off to the next bus stop.

"As we had applied for a bus service license to run the route Premium service 588 and to use the bus stops, the driver was unhappy when he was being honked at for no reason by the public bus behind.

"When he went down out of the bus to confront the driver behind, both drivers started greeting each other with a stream of expletives.

"We believe this incident was triggered by some misunderstandings and that it could have been avoided.

"The public bus might have thought that a private bus was using the bus stop and that he had the right of way.

"Increased tension happens frequently on our roads during the morning rush hour traffic where there is a heightened level of driving anxiety, coupled with the increased volume of vehicles on the road.

"Our team has given the driver a stern warning that his behaviour is unacceptable.

"We do not tolerate reckless behaviour by our drivers which causes distress to our commuters.

"We will be keeping a close watch on the driver’s behaviour and performance the next few weeks."

Alex recounted the incident and said: "The bus driver honked at the Premium 588 bus two to three times.

"Then, the driver of the Premium bus exited and stood at the front door of bus 52 to shout at the bus driver.

"I wanted to board the SBS bus to go to work, but I could not as the doors were closed.

"Many other commuters were also waiting for the doors of the bus to open."

Alex added that the SBS bus driver waited for the Premium bus to leave before opening its doors to allow commuters in.

Stomp has reached out to SBS Transit for comment.

Related Stories
Man pins woman down and tussles with her in the rain along Geylang Road
Cabby hits female passenger and pushes her to ground in dispute at Pearl Bank Apartments
Family dispute escalates into tussle at Yishun coffee shop, police alerted
More About:
dispute
Bus
sbs
argument