Police looking for man who took $100,000 worth of jewellery in Ang Mo Kio robbery 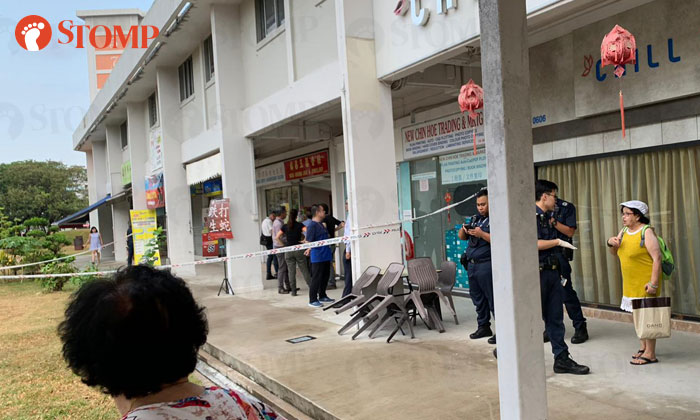 The police are looking for a man who took about $100,000 worth of jewellery from a jewellery shop in Ang Mo Kio on Wednesday afternoon (Aug 14).

A Stomper alerted Stomp to the case of robbery at Block 574 Ang Mo Kio Avenue 10 and shared photos he had received from his brother who had passed by the scene while he was on the way to pick up his children from childcare.

"He told me there were a lot of police cars and officers," the Stomper said.

In the photos, the area in front of the jewellery shop is cordoned off.

In response to a Stomp query, the police said they were alerted to the incident at about 4.10pm.

"Police preliminary investigations reveal that a male suspect entered the jewellery shop at about 4pm," a police spokesman said.

"He jumped over the counter and grabbed jewellery that amounted to about $100,000, before he fled.

"No weapon was used and no one was injured."

The police said the male suspect was wearing a black helmet, blue jacket, black pants and carrying a black bag.

Anyone with information can call the police hotline at 1800-255-0000 or submit information online at www.police.gov.sg/witness.