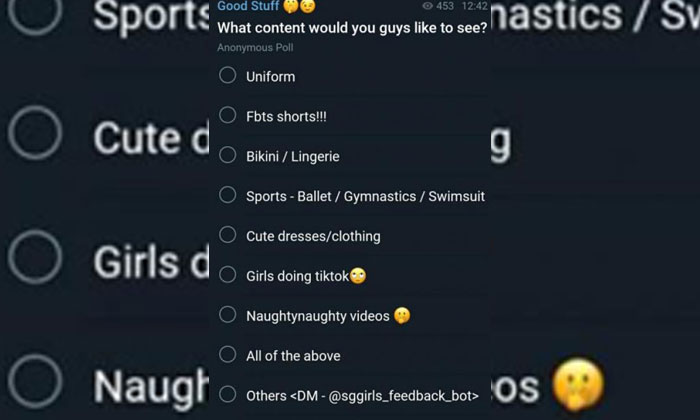 She posted a selfie on Instagram of her lying on a picnic mat, but it ended up in a group called "Good Stuff" on the messaging app Telegram.

The group posts pictures of girls, mostly in secondary school or junior college, with lewd comments.

The polytechnic graduate, Miss Chiam Ruo Tong, 20, told The New Paper she was tipped off that her picture was being used in the group, which had about 800 subscribers.

She realised to her horror that users added aggressive sexual captions to her photos.

She said: "I was disgusted at how simple photos could be twisted by their sick minds to fit their own sexual narrative.

"I was upset that so many people thought it was okay to make such lewd comments about the girls, many of whom are minors."

A check on the page by TNP showed hundreds of photos of young girls being shared.

TNP understands the group was taken down on April 16.

The police confirmed a report has been filed and investigations are ongoing.

Most of the content were from TikTok videos and pictures of girls in school uniforms, PE attire or swimwear retrieved from their social media accounts.

The administrators summarised details of some of the girls, such as their name, age, school, social media account and would ask for feedback on the pictures in the form of emojis.

Subscribers could indicate the kind of pictures they would like to see such as "uniforms" and "bikini/lingerie".

They were also encouraged to send in pictures and details of the girls to the administrator.

Kalco Law criminal lawyer James Ow Yang said this was a case of outraging the modesty of a woman.

Mr Ow Yang, 32, said: "The posts seem to have a consistently sexual theme and purpose. The fact that the victims are minors may be viewed by the court as aggravating."

Section 509 of the Penal Code states it is a crime to use any word or gesture to insult the modesty of a woman.

Those found guilty can be fined, or jailed, or both.

He added that the people in the chat may appear to be spectators, but they risk being charged for abetment and by contributing to the demand for such material.

Clinical psychologist Carol Balhetchet said: "The users cheapen the girls and encourage the other members to demean the girls through their sexual implications.

"I was appalled. If the girls saw this, they could feel insulted, intimidated or harassed."

She added the lewd comments could affect one's self- esteem and confidence.

Ms Balhetchet said: "It is a message to be careful about what you post. If it is out on the highway of social media, you put yourself up to the general public."

Meanwhile, the group that was taken down had a link to another Telegram channel with about 1,400 subscribers and over 600 pictures of girls.