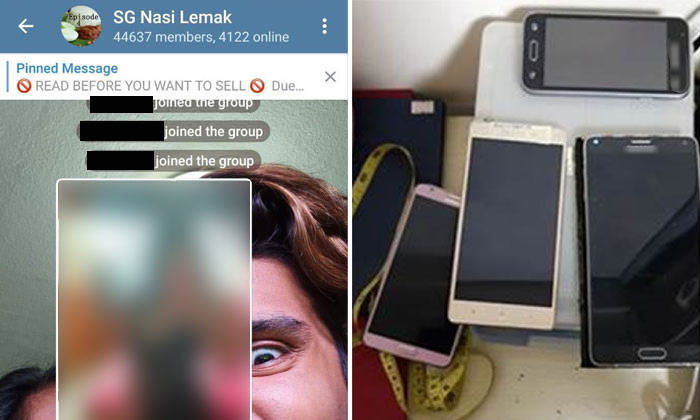 Four male suspects, aged between 17 and 37, have been arrested for their suspected involvement in circulating obscene materials and promoting vice activities through the SG Nasi Lemak Telegram chat group.

The police said in a statement on Tuesday morning (Oct 15) that they received several reports between Mar 15 and Oct 3 against the chat group for the alleged offences.

The police said that officers from Ang Mo Kio Police Division established the identities of the men and arrested them at various locations islandwide on Oct 14.

Investigations revealed that two men, aged 26 and 37, are the administrators behind the said chat group, while the 17-year-old and 19-year-old teenagers are the distributors of the obscene materials.

More than 10 electronic devices, including a central processing unit, a laptop, a hard disk and several mobile phones, were seized as case exhibits.

According to Chinese evening daily Lianhe Wanbao, there had been more 44,000 members in the chat group when it was still active.

Upskirt photos were allegedly included among the obscene materials of Singaporean girls shared in the group.

Membership in the group had spiked in recent months as more people became aware of it and those interested in gaining access to the group would pay $30 as an "entry fee".

The four suspects are expected to be charged on Tuesday with conspiracy to commit distribution of obscene materials.

If convicted, they can be jailed for up to three months, fined, or both.

The police advised members of the public not to solicit in any lewd websites or join such online platforms and illicit chat groups.

The police said they take " a serious view of anyone involved in criminal activities and will continue to take tough enforcement actions against those breaking the law."