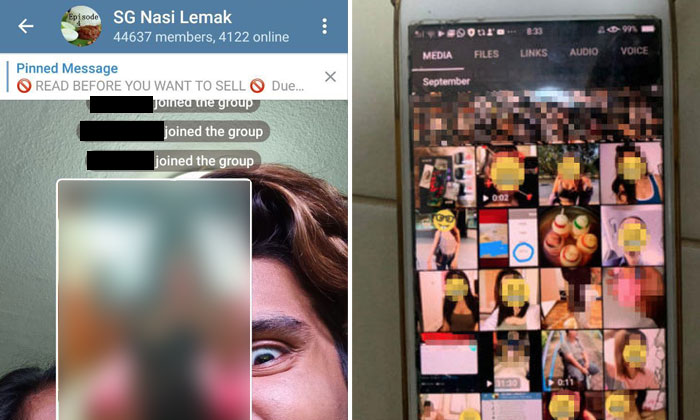 The police said on Friday (Oct 4) that they are investigating a Telegram chat group suspected of sharing obscene photos and videos of Singaporean girls after reports were lodged by some of the victims.

The photos allegedly include upskirt photos.

The chat group under investigation, "SG Nasi Lemak", is no longer accessible, although screenshots seen by Chinese evening daily Lianhe Wanbao show there had been more than 44,000 members when it was still active.

According to a reader Wanbao interviewed, the group had been set up for more than a year, but its membership had spiked in recent months with more people coming to know of it.

On Sept 30, Twitter user Darcel Anastasia condemned the group on the social media platform as she was mentioned in Singapore Nasi Lemak.

This prompted many other Twitter users to express their disgust at the content being circulated in the chat group.

Police said the circulation of obscene materials is an offence, and that anyone with information should call the police hotline on 1800-255-0000 or submit their information online via http://www.police.gov.sg/iwitness

All information will be kept strictly confidential, they said.

Anyone who transmits obscene materials electronically can be jailed for up to three months, fined, or both.