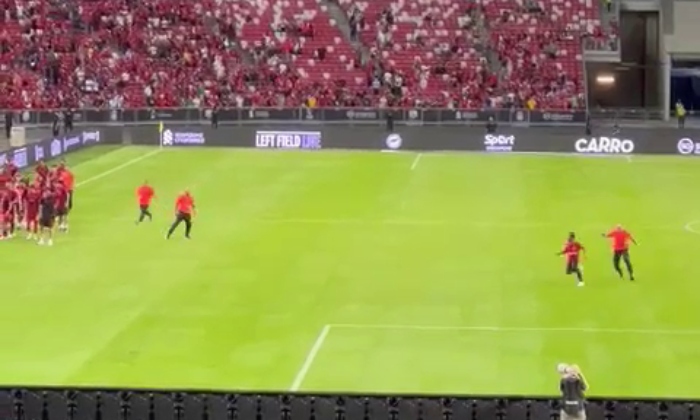 The two pitch invaders who jumped the barricade at the National Stadium after the exhibition football match between English Premier League sides Liverpool and Crystal Palace on Friday night (July 15) are assisting with police investigations.

In response to queries, a police spokesman said they received a call for assistance at the National Stadium at 11.19pm on Friday.

"Two men, aged 17 and 41, will be assisting in investigations for the offence of wilful trespass under Section 21(1) of the Miscellaneous Offences (Public Order and Nuisance) Act 1906," he added.

The offence of wilful trespass carries a punishment of a fine not exceeding $1,000.

Liverpool, 19-time English champions and one of the best-supported football teams in the world, beat Palace 2-0 in front of 50,217 fans to lift the Standard Chartered Singapore Trophy. Both clubs were here on a tour before the new EPL season kicks off on August 6.

After the trophy presentation, the Liverpool squad took a victory lap on the pitch to acknowledge and applaud their supporters.

As they were strolling along the south stand of the stadium, two men, wearing Liverpool's red home jersey, leapt over the advertising hoarding and onto the pitch in quick succession.

The first ran past the Liverpool players and evaded security officials' initial attempts to catch him and ran around the pitch, before he was apprehended.

The second man stumbled as he attempted to clear the advertising board, and fell right in front of the Liverpool players and their manager Jurgen Klopp.

As soon as he got to his feet, though, he was tackled back to the ground by security officials.

This was the latest in a number of such incidents at football matches at the 55,000-capacity National Stadium.

In 2019, international matches involving Senegal and Brazil, Singapore and Uzbekistan, as well as a pre-season friendly between Italian giants Juventus - then led by Portuguese megastar Cristiano Ronaldo - and EPL side Tottenham Hotspur, all saw fans take to the pitch during the game.