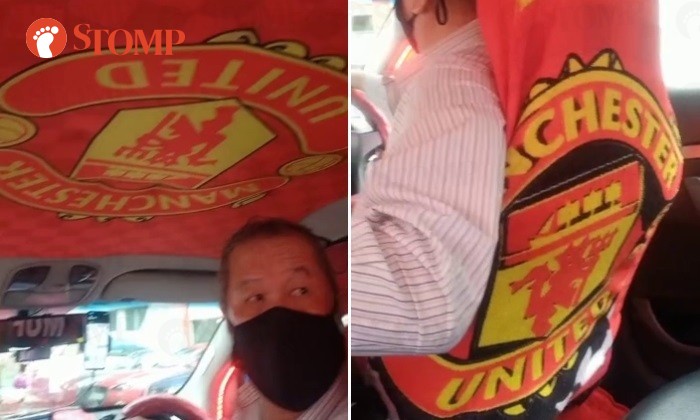 English Premier League football club Manchester United may not have won a trophy in a while, but they have one diehard fan in a Comfort CityCab driver in Singapore.

When Stomper Ms Nurfa used Grab to book a taxi in Choa Chu Kang on Thursday (June 30), she did not expect the vehicle that arrived to be a mobile shrine to the Red Devils.

The videos she shared with Stomp show the interior of the cab awash with the Man U club crest, including the front seat covers, ceiling, sunshade and rear dash.

She said: "The uncle is cute and so proud of his taxi interior, saying 'Wonderful ha.'"

The driver did not seem to mind her taking the videos and even encouraged her.

She said: "He did tell me: 'Go take picture, take video show your friends and boyfriend! Show everyone!'

"Somehow it made me want to share with Stomp too, so let the whole world know. Hope the uncle is happy, haha."

She described the cabby as a "jovial person".

She said: "I'm not into any football club, but even so, as soon as I entered his taxi, I felt so thrilled!

"I can't imagine if it's a Liverpool diehard fan who booked his taxi though."