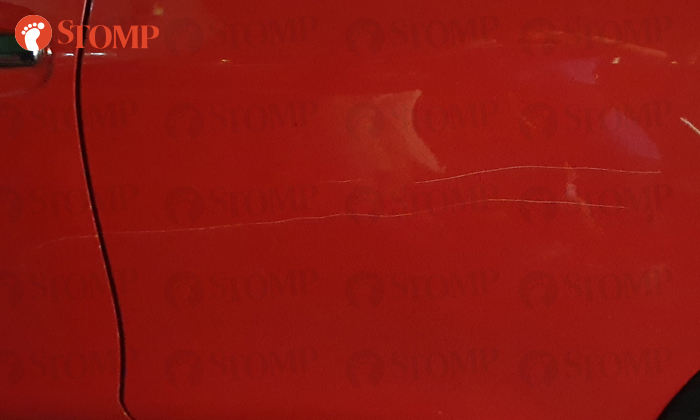 Police are investigating an incident where a man had his car scratched after parking at the multi-storey carpark of Jurong Point on Thursday (Dec 19).

Stomper Chris said he had parked at the shopping centre's new wing at around 6.30pm to send his son to a class.

Chris, who had two young children with him at that time, recounted: "I was shocked to see the scratches on my car when I returned.

"I suspect that the culprit is the driver of the car that was parked beside me.

"My nine-year-old son was opening his door when he accidentally knocked into the adjacent car, which was parked out of its lot.

"I didn't realise there was someone inside the car until I was at the exit. I saw a woman moving to the side to check the car from inside.

"As I was in a rush, I did not have the chance to apologise."

Chris, who shared with Stomp photos showing two long scratches on his car, subsequently made a police report on the same evening.

He added: "There are CCTV cameras around, so good luck to the person who committed this silly act.

"I want to share this so that everyone is aware that there are such sick people around.

"I thought that the culprit could have been more understanding since it was a small kid who accidentally knocked into the car."

The Stomper, who said he was "frustrated" by the incident, believes that the scratches were caused by a car key due to how "deep" they were.

Related Stories
Driver finds two 5cm-long nails in car tyres after parking at Harvey Crescent
Woman looking for culprit who scratched her car at Junction 8 carpark
Stomper finds car with long scratch on its side after parking at Outram
More About:
damage
vandalism