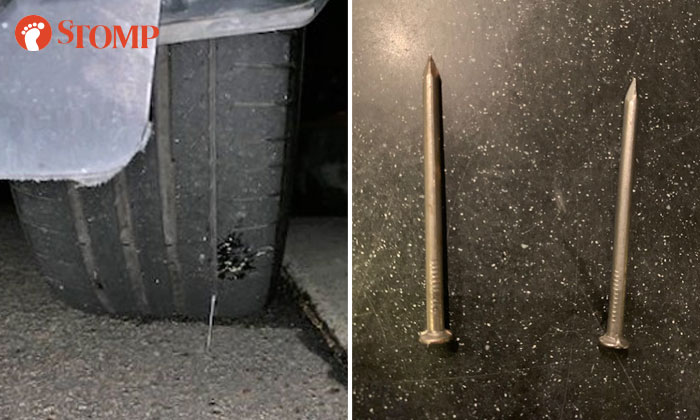 A driver was shocked to find two 5cm-long nails embedded in his car's tyres while parked along Harvey Crescent in Simei on Friday (Sep 20).

Stomper N alerted Stomp to the incident that happened to her father, Mr Leong.

Mr Leong told Stomp in a phone interview that he had parked his car at Harvey Crescent at about 9.30am and went to see his friend.

When he came back to the car at about 10.15pm, he decided to check his tyres before driving off.

He was horrified to find the two nails embedded in his front-left and back-left tyres. He noted that the left side of his car was close to the pavement while the right side was exposed to the road.

"I was not parked on any traffic enforcement line or causing any obstruction," said Mr Leong.

"Any resident could have gone around my car.

"I feel like if any of the residents had a problem with drivers parking there, they could have simply left a not rather than compromising their safety."

He told Stomp he has since made a police report.

He hopes by sharing this, it will warn other drivers to stay alert.