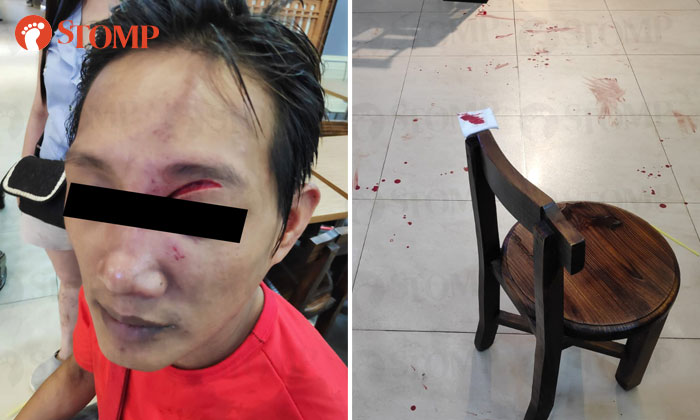 Two men were arrested after they were embroiled in a fight at a Korean restaurant in Hillion Mall on Tuesday night (Apr 16).

Stomper Irene alerted Stomp to the incident that involved her friend and a waiter at Ha-Jun Korean restaurant.

The fight allegedly started after the waiter rushed them to finish their meals.

According to an Internet search, the restaurant closes at 10pm.

"The four of us were eating at the restaurant when my friend joined us at 9.30pm," she said.

"While my friend was eating, the waiter said, 'faster eat, faster eat'.

"He then asked us sarcastically if we wanted to clean the floor for him.

"My friend then scolded him for having a bad attitude and that's when the fight started."

In photos shared by the Stomper, her friend has a gash below his left eyebrow. Blood is seen on the floor.

Irene said she does not know if either man used anything apart from their own hands to hit one another.

In response to a Stomp media query the police said they were alerted to the case of affray at 15 Petir Road at about 9.49pm.

"Two men, aged 33 and 34, were arrested in relation to the case," a police spokesman said.

The 34-year-old diner was conscious when taken to Ng Teng Fong Hospital.