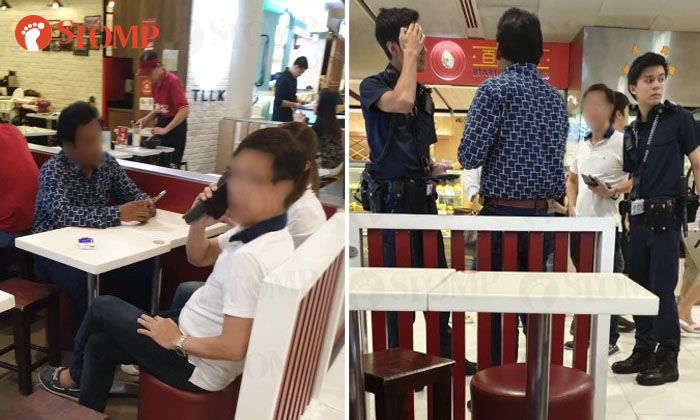 Two men allegedly argued over a seat at VivoCity's Ya Kun Kaya Toast on Oct 25 at 3.45pm, and one of them ended up calling the police.

Stomper Chan was with his friend at the cafe for lunch when he witnessed the incident.

The place was relatively empty and there were many seats around.

About five minutes after Chan arrived, he noticed a man enter the cafe to meet a woman who was already seated.

They were seated facing each other at a four-seater table and had not ordered anything.

Chan said that the man and woman were having a conversation for about 10 minutes, when another man in glasses arrived.

He sat next to the woman and asked the other man to leave.

According to Chan, the man who was first there said that he did not know why he had to leave.

The man in glasses insisted on taking the other man's seat.

Throughout the argument, Chan said that the woman remained silent.

A few minutes later, staff of the cafe tried to break up the argument and suggested they sit at separate tables, but to no avail.

Chan said: "The man who was there first refused to move and pointed out that there were many other seats in the cafe.

"However, the man in glasses did not want to move and decided to call the police over this small issue."

The police arrived and the argument was broken up.

Chan and his friend left the cafe and did not know what happened after.

"I mean it is really quite silly to be calling the police over this small matter. One of them should have just moved to the many other seats in the cafe," he added.