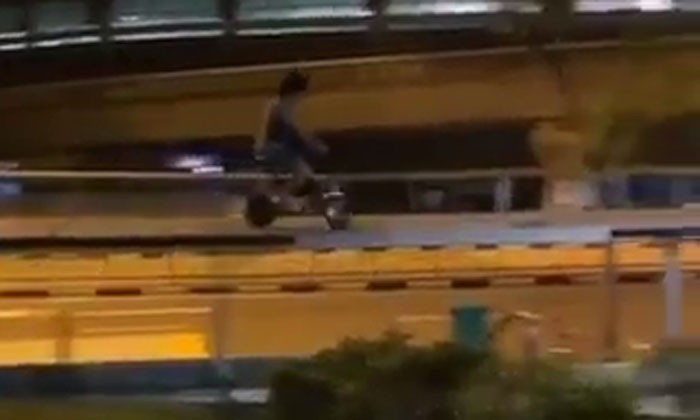 A 19-year-old man was arrested for his suspected involvement in a case of rash act after he was caught on video riding a personal mobility device (PMD) on top of a sheltered walkway in Bukit Panjang.

The PMD rider took flouting rules to the next level following a ban of PMDs on footpaths.

The police said in a statement on Wednesday afternoon (Nov 20) that they had received a report of the man riding his PMD on the shelter of a walkway on Tuesday (Nov 19).

"Preliminary investigations revealed that this occurred along Lompang Road on Nov 18," the police said.

Officers from Ang Mo Kio Police Division established the identity of the man through ground enquiries and with the aid of police cameras and arrested him on Tuesday.

Police investigations against the man are ongoing.

Anyone convicted for rash act with endangers life or the personal safety of others shall be jailed up to six months, fined up to $2,500, or both.

Related Stories
PMD rider honks at pedestrian and scolds him for not giving way: 'We must share the path'
Count how many times this GrabFood rider narrowly avoids hitting vehicles and pedestrians at Pasir Ris
Masked PMD rider confronts couple and accuses them of 'staring' at him at Bishan bus stop
More About:
PMDs
arrested
rash act
e-scooter
dangerous
shelter