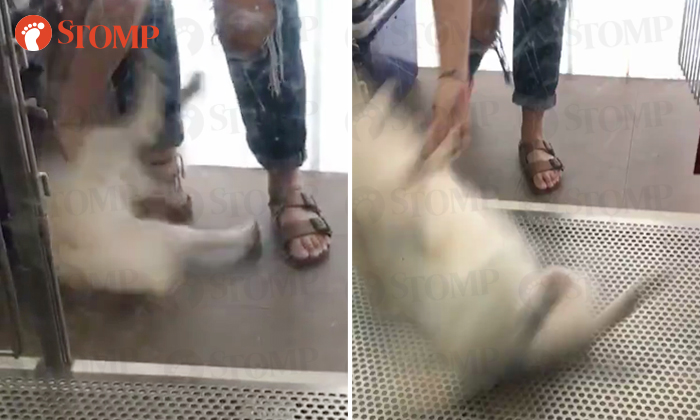 A female employee who was filmed manhandling a dog at a pet shop in Serangoon was "reprimanded" and "counseled" following the incident, and has also "resigned voluntarily".

The incident occurred at Pick-A-Pet in Nex shopping mall on Thursday afternoon (Sep 7).

Stomper J said she witnessed an employee at the store throwing a Japanese Spitz into its cage and also shared a 10-second video showing what happened.

She told Stomp: "The dog was running around happily outside its cage. I'm not sure how it got out.

"The staff went back inside, trying to get the dog in. She was kicking the dog to make it go into the cage. I did not manage to capture that.

"I wanted to send a Snapchat video to my friends but caught her throwing the dog back into the cage."

J also alerted Pet Lovers Centre to the incident via its Facebook page and the post has since garnered almost 1,400 shares.

She wrote: "Is this how your staff handle the dogs? This is absolutely disgusting behaviour."

In a phone interview with Stomp, J added that while she did not confront the employee as she did not think it was her place to do so, she uploaded the video because she wants people to know that the employee's actions were unacceptable.

Pick-A-Pet has since released a statement on its Facebook page in response to the incident.

Apologising "to the public for this alleged incident", it said: "The staff has been reprimanded, counseled and has resigned voluntarily.

"We agree that in no circumstances that our puppies should be treated in such manner.

"We have brought the puppy for a full health check to ensure the well being of the puppy and the puppy has no skeletal damage nor trauma to any parts of its body.

"We are thankful for the care and concern that the public has showered the puppy with and one's action does not represent the whole company in entire."

The statement was accompanied by a photo of the dog's medical report from The Veterinary Clinic at Holland Village, stating that the animal was "in good health without any physical or behavioural signs of abuse."