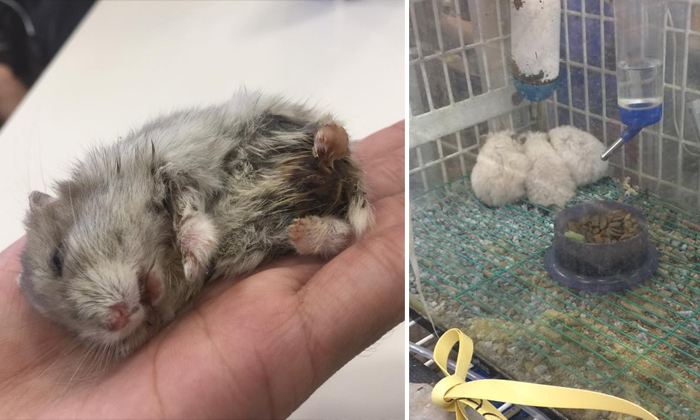 The Agri-Food & Veterinary Authority of Singapore (AVA) is looking into feedback about how animals at a pet store in Toa Payoh are allegedly being neglected and housed in unsatisfactory living conditions.

Stomper Felicia had posted on AVA's Facebook page about what she apparently saw at the Block 69 store on June 27.

In her July 16 post, Felicia said she noticed four Syrian hamsters housed in a small tank.

They were hunched up in the corners (believed to be a sign of stress) and were being fed fish-shaped food, which Felicia identified as cat kibbles.

She also spotted a winter white hamster in another tank, lying on its side with a soiled bottom that was attracting bugs, and breathing heavily.

Felicia wrote, "The pet shop owner did not believe that the hamster was sick when informed, and proceeded to knock on the tank."

According to her, the store owner then "scooped the poor hamster out with its food bowl", "hurried to the back of the shop and just left it on the shelf" instead of a quarantine area.

She added, "The pet shop owner was not willing to bring the hamster to the vet when it desperately needed medical attention, and only reluctantly gave it when I mentioned that I will cover the hamster's vet fees. Unfortunately, the hamster passed away before the vet could put it to sleep."

Other issues of concern raised by Felicia include dead fishes "dumped into the rubbish bin at the back of the shop" and a lack of proper food for the rabbits there.

In response to queries by Stomp, an AVA spokesman said:

"AVA is investigating this feedback.

"Prior to this feedback, AVA last inspected the pet shop in June 2017. No breaches of our licensing conditions were found. There were also no signs of animal welfare being compromised."