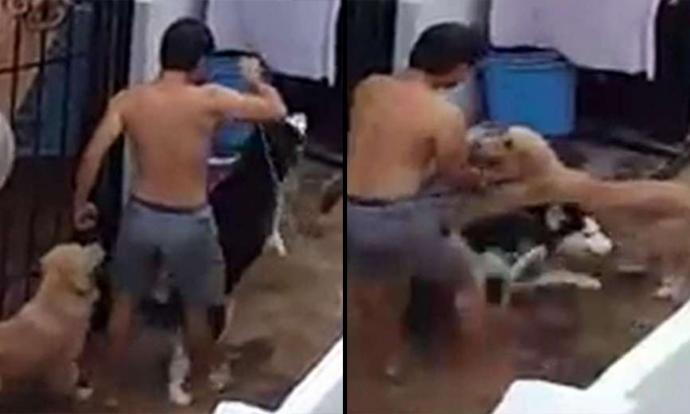 A self-proclaimed animal rescuer was fined $8,000 on Monday (Jan 23) for abusing his Siberian husky.

Alan Chiam Choon San, 41, was exposed by a neighbour who shared videos of how he kicked and punched the dog at his Jalan Loyang Besar house on May 23, last year.

From the window of her room, she recorded footage of these acts on her mobile phone and uploaded three videos which went viral.

The first video showed him giving kicking the dog while it was sitting with its head down.

The second showed the dog sitting upright as Chiam berated it. He proceeded to punch the dog on its head and it could be seen yelping and recoiling in pain.

Chiam pulled the dog by its collar for a few seconds, such that only its hind legs touched the floor, causing it to gasp for air. He then kicked it.

In the final video, the dog was chained and on all fours, when Chiam kicked it again.

Chiam was also seen using a pole to hit its head.

A medical report stated that the dog had a scrape on its body but the wound could not be conclusively established to be the result of the acts of cruelty.

On Monday, the court heard Chiam abused the dog after it growled at his helper.

His lawyer, Mr Charles Yeo asked District Judge May Mesenas to fine his client $6,000 and stressed that he earns a low income.

He also said Chiam is not inclined towards animal cruelty and has a family to support.

DPP Tan, who said that the dog is now with the Society for the Prevention of Cruelty to Animals and will be rehomed, urged the judge to fine him $10,000.

He added: "It was not just a single act of violence but multiple blows that lasted around six minutes on a subdued and non-hostile creature."

A charge over keeping 22 dogs on the premises, which is not a dog farm, without permission from the Agri-Food and Veterinary Authority, was taken into consideration during sentencing.