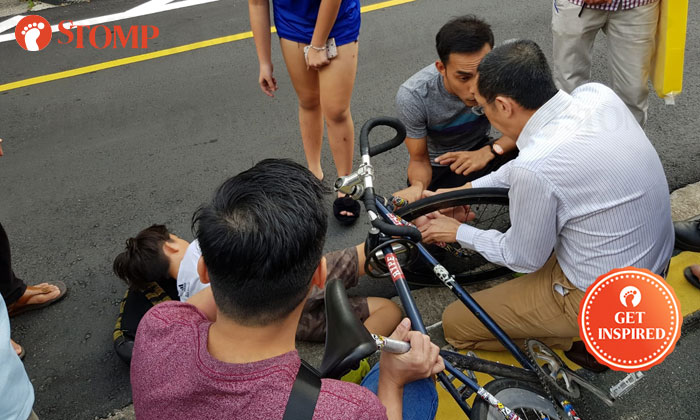 A young boy was taken to hospital after getting his leg stuck in a bicycle wheel at Woodlands Drive 50 on Monday (Dec 10).

Stomper David alerted Stomp to the incident and shared photos from the scene that showed the boy lying on the ground and surrounded by people.

David shared with Stomp he was heartened and impressed with how people came together to help the boy whom he described to be "very young".

"He accidentally fell by the side of the road and got his leg stuck in the bicycle wheel," said David.

"One of the guys who attended to the boy was from the Singapore Civil Defence Force (SCDF).

"He was very experienced and guided the rest on what to do.

"A nice doctor from a nearby clinic came to the rescue too, everyone was there to help."

He added he felt bad for the boy who looked to be in great pain.

"When the SCDF came, they cut the spokes of the wheel and freed the boy," he said.

In response to a Stomp media query, the SCDF said they responded to an incident near 888 Plaza, Woodlands Drive 50 at 5.55pm.

"A person was conveyed to hospital," a spokesman said.

Related Stories
Kudos to female driver who stayed with motorcyclist injured in accident at Mountbatten Rd
Awesome cabby helps Stomper to change tyre when no one else stopped, declines reward
Men rush to stranded uncle's aid in Woodlands after seeing appeal for help on Facebook
More About:
injured
bicycle
child
inspiring
helpful
heroes