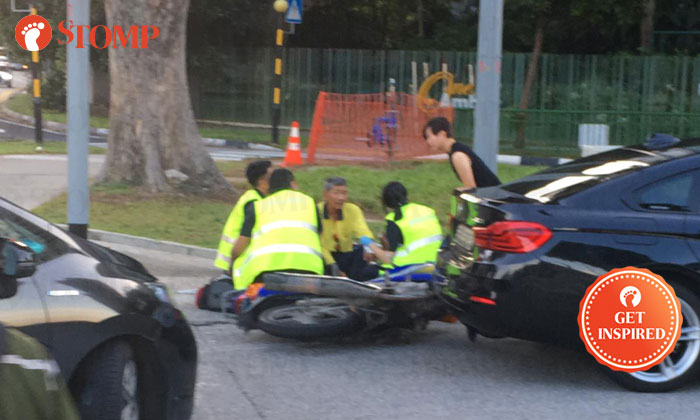 A 67-year-old motorcyclist was taken to hospital after he was involved in an accident at the junction of Mountbatten Road and Tanjong Katong South Road on Tuesday morning (Oct 30).

A Stomper was at the scene at about 7.30am when he saw the motorcyclist lying on the road.

"I overheard that the motorcycle slipped and knocked into a vehicle," he told Stomp.

He was touched when he saw a woman standing over the fallen rider.

"It's good that the lady driver was helpful and stayed with the injured motorcyclist," he said.

"I think she should be commended for her actions."

In response to a Stomp media query, the Singapore Civil Defence Force (SCDF) said they were alerted to the accident at about 7.20am.

A police spokesman told Stomp they were alerted to the accident at 7.03am.

"The motorcyclist, a 67-year-old man, was conscious when conveyed to Raffles Hospital," the spokesman said.

Related Stories
Do you know this hero? Woman praises man who voluntarily directed traffic when lights were faulty
Guy grateful to fellow rider who stopped to help after his bike broke down: 'We are brothers now'
Worker "comes out of nowhere" to help uncle cross road under scorching sun
More About:
Accidents
helpful
inspiring
kind
heartwarming