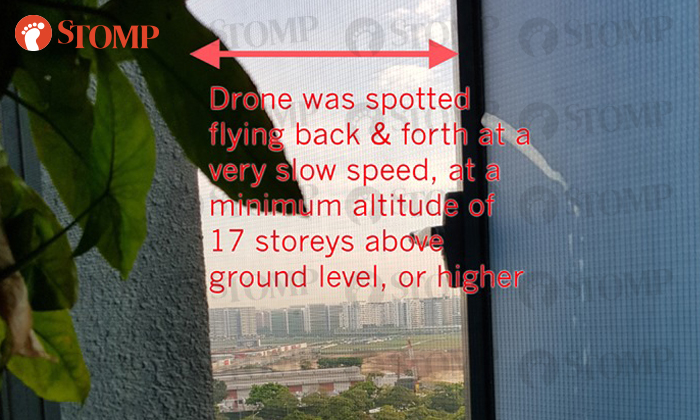 Police are investigating after a resident in Pasir Ris Drive 1 spotted a drone flying past her bathroom window while she was showering last Thursday (May 2).

Stomper Amelia, who lives on the 17th storey, said she noticed "something flying back and forth" outside her window at around 5pm.

"My toilet window is always open because I am on the 17th floor and nothing is directly outside it, so I assumed there were no privacy issues," she explained.

"At first I thought the object was a plane, because I live quite near the airport. But then I saw it fly past and back again."

Amelia soon discovered that the flying object was a drone.

She added: "It was about 50-100m away from my toilet window and it was definitely able to look right in (with a perfect view of me showering).

"It was flying at a relatively slow speed of around 5-10km/h.

"The last time I saw it, it was going towards Elias Green condominium. A short while later, it flew back in the direction it had come from, towards Ris Grandeur condominium."

The Stomper, who also posted about the incident on Facebook, said this was her first time seeing a drone in the area.

"However, when I asked my neighbours, they said they had seen it before," she told Stomp.

Amelia lodged a police report on the same day.

She also wrote in her Facebook post: "The Pasir Ris Neighbourhood Police Centre immediately sent officers down to my place.

"They told me that they had scoured the area but were unable to find the drone operator.

"I would like to urge residents -- especially those staying on high floors -- to be mindful of what's outside your windows, and to close them when you are showering, as a precaution!"

Raising privacy concerns, Amelia told Stomp: "There should be tighter control of drone use.

"People, especially those in residential areas, should also report any drone sightings."