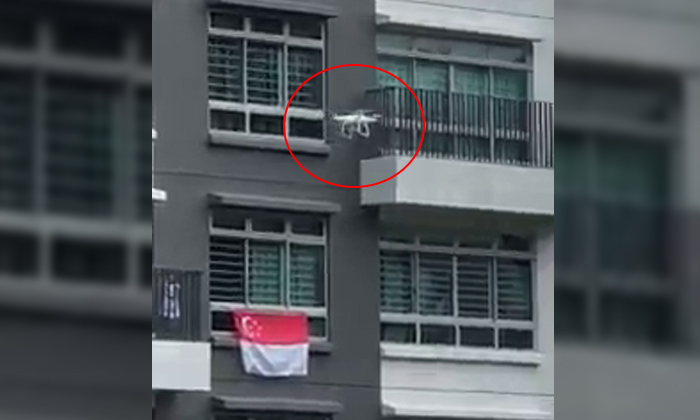 A drone that was spotted flying around the Treelodge @ Punggol estate has sparked concern among residents and netizens.

Mr Alex Lee, a 34-year-old manager, uploaded a Facebook video of the incident on Saturday (Sep 22) to warn people about the drone.

He said in a caption: "Seems like this is flying to [bed]room and toilet area to peep."

Friends who are staying in Punggol, please take note of this "seems to be pervert". This is taken...

Posted by All Singapore Stuff on Saturday, 22 September 2018

Mr Lee told Shin Min Daily News that the video was taken by his wife on Sep 12 at around 2pm, when she visited his sister's home.

He said: "My wife saw the drone drifting outside the window for quite some time and found it very suspicious. She immediately informed my sister and the two of them observed the drone for about 10 minutes by the window."

Mr Lee's wife took out her handphone to film a video, but the drone suddenly flew away.

According to Mr Lee, his wife returned to the estate on Sep 22 at around 9am, and saw a man controlling the drone.

Her suspicions roused once again, she informed Mr Lee about the incident and showed him the video that she had previously filmed.

They plan to make a police report and seek help from the town council, reported Shin Min.

Another 50-year-old resident, Mr Zeng, told reporters that he has seen hobbyists flying drones in the open space nearby from time to time, but has never seen one so close to people's homes.

Netizens who watched the video have also raised safety and privacy concerns, as well as called for authorities to investigate: