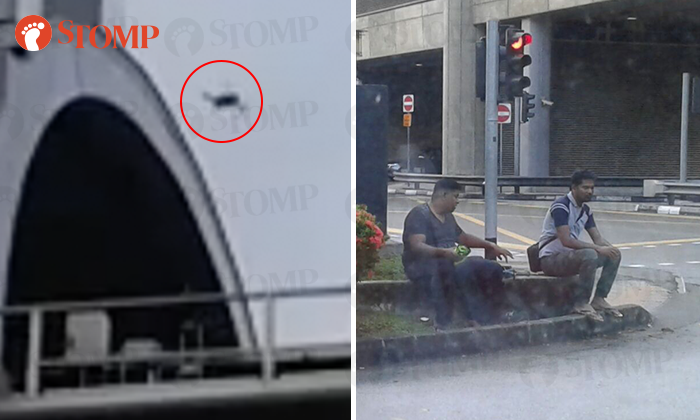 K, who works as a security employee in a factory nearby, was concerned about the safety of such an action.

He quickly called the Police.

Stomp understands that a call was made to the Police, but the men had already left by the time the officers arrived.

According to K, two of the men sat on the ground near a traffic light, while the third sat adjacent to them across the road, near a track pillar.

They did not wear any form of identification, nor was there any indication that they were SMRT staff.

Said K: "The plant which I am working at is a 'no photography and video' zone.

"Them flying the drone at that height would compromise the rule.

"I’ve never seen people flying a drone near or on the track. Isn’t this a security breach? What if it crashes onto an oncoming train?"

In response to a Stomp query, a spokesman from the Singapore Police Force (SPF) said:

"On 5 November 2017 at 7.50am, the Police received a call for assistance regarding two men allegedly flying drones at 91 Joo Koon Circle.

"Upon Police's arrival, there was no sign of the two men.

"The Police are looking into the matter.

"In the event that any UAV is flown in a manner that poses a serious and imminent risk to the safety of the public, law enforcement officers have the authority to take down the UAV and take the operators to task.

"In addition, any person who uses a UAV to conduct any criminal activity will constitute an offence under existing laws such as the Penal Code.

"The Police advise members of the public to call ‘999’ for police assistance if they spot any suspicious activity involving unmanned aircraft.”

According to The Civil Aviation Authority of Singapore (CAAS) website, pilots should not fly their drone over restricted, prohibited or dangerous areas, including security-sensitive locations.