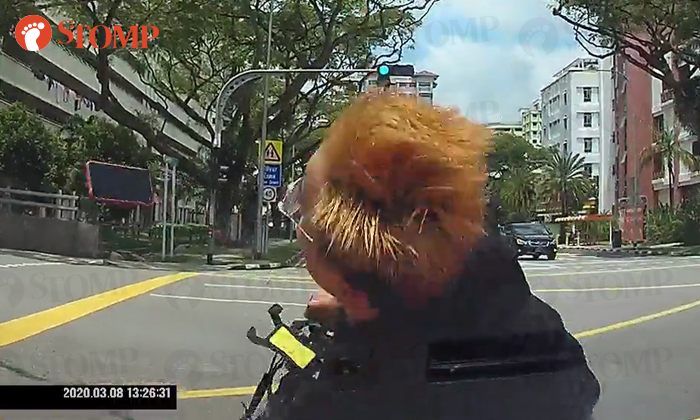 A personal mobility device (PMD) user was knocked down by a car after he tried to ride across a road despite the traffic light not being in his favour and the presence of oncoming vehicles.

Stomper B submitted dashcam footage showing his encounter with the PMD rider along Woodlands Avenue 1 on Sunday (Mar 8), at around 1.25pm.

In the video, the PMD user can be seen riding in between two cars, leaving him hidden from view, while crossing the road.

From the way his head is bent down, he is believed to have been looking at his handphone while riding across the road.

By the time the PMD user looks up from his screen, it is too late.

Unable to stop in time, B collides with the PMD user and knocks him off his ride. His phone is also sent flying out of his hands.

Stomper B said no one was injured in the incident and the police were not called.

He added: "As seen in the video, the PMD rider could still stand up and walk on his own.

"The PMD rider also claimed that he himself was a car driver too, but it's sad to say that he did not follow basic traffic rules."

Under the Active Mobility Act, PMDs are not allowed on roads.

Related Stories
Cyclist and e-scooter rider try to avoid accident on Woodlands park connector -- but end up colliding
E-scooter rider taken to hospital after accident with car in Tampines
Driver posts video of how 'young punks' reacted after near-accident, all 3 get slammed by netizens
More About:
pmd
PMDs
accident
reckless