Owl flies into kitchen in Sembawang Crescent, lands on top of fridge and just stays there until... 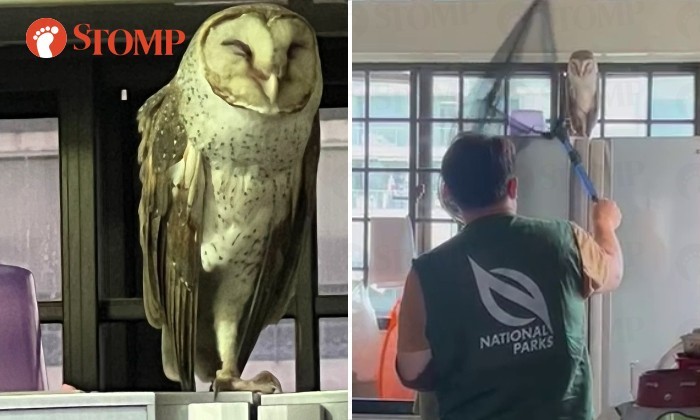 Was it looking for Harry Potter?

A barn owl flew into the kitchen of a 15th-storey flat at Sembawang Crescent and rested on top of a fridge on Tuesday (Aug 2).

Sharing photos and videos of the incident, Stomper Balan said the bird came through the living room window at 6.50am.

He told Stomp: "On that morning, my wife and my helper were at home after sending our kids to school."

Asked if his wife and his helper were frightened by the owl, Balan replied: "Yes, of course. It was a very big bird."

A Singapore barn owl ranges from 34cm to 36cm in height.

They called NParks for help. The Stomper said the owl remained on top of the fridge until a man from NParks came to take the bird away at 8.30am.

A video Balan shared showed a man in an NParks vest taping up a cardboard box as he prepared to remove the owl.

A woman can be heard in the video asking whether he had caught one before and the NParks man replied that he had just caught one "triple the size of this".

He then put on a glove and took out a net and a towel. As he cautiously approached the owl on top of the fridge, the bird did not move until the man placed the net over it. He then carried the owl in the net and placed the bird inside the cardboard box.

It is not known what happened to the owl after that. Stomp has contacted NParks for more information.

Back at Hogwarts perhaps? Hoo is to say?