NTU student's head bleeds after bookshelf falls onto him in hall, university responds 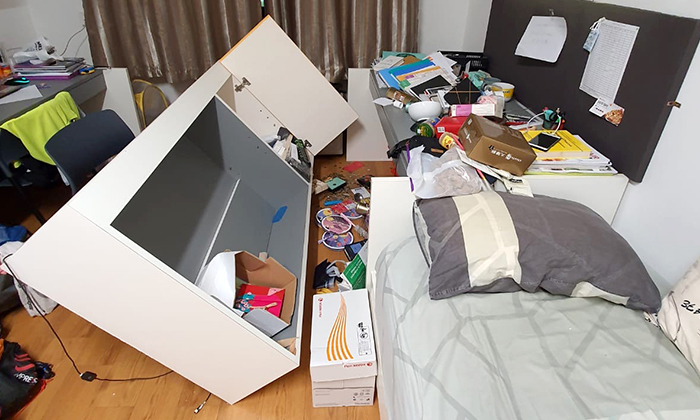 A Nanyang Technological University (NTU) student's head bled when a bookshelf fell onto him while he was in his room at Hall 11.

A 23-year-old student Mr Lin, who is the student's neighbour, shared that his bookshelf also fell at about 5.30pm on Nov 18.

Mr Lin said that the shelf was above his study desk.

"Luckily I was out at the time and not sitting at my desk. I can't imagine what would've happened.

"There were less than 10 books on the shelf. There were also some cutlery, documents and some fragile items like bowls."

Mr Lim said that his neighbour's bookshelf had fallen somewhere between the months of February and March of 2019.

Lin's neighbour wasn't that lucky and his head was hit by the bookshelf. The student had to be sent to the hospital as his head bled.

Mr Lin shared about the incident on social media platforms, reminding hall residents to be mindful.

He also pointed out that Halls eight to 11 were using the same wall-mounted bookshelf.

Lianhe Wanbao reported that Mr Lin said the school sent a contractor to conduct checks on all the shelves in the hall after the incident.

However, residents in other halls do not know about this incident and their shelves weren't checked either. He felt that this was a safety concern.

A spokesperson from NTU told Stomp: "There were two reported cases of older bookshelves falling accidentally at one of the halls.

"The affected student in the first incident received immediate attention and outpatient treatment for minor injuries.

"No one was hurt in the second incident.

"The University will be inspecting bookshelves in the hall rooms on campus, and they will be reinforced as needed."