NParks personnel have tug of war with 2.5m-long python at Jurong West 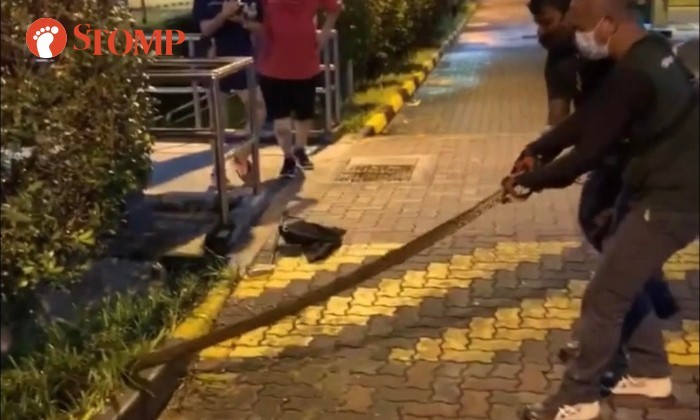 Two National Parks Board (NParks) personnel captured a 2.5m-long reticulated python at Jurong West Street 65, but not before having to play 'tug of war' with it.

Stomper Tim alerted Stomp to the incident that happened on Sunday (Sep 13) and sent photos of the snake.

Tim had spotted the snake slithering in the drain and detailed his encounter in his Facebook post.

According to his post, he called NParks immediately after spotting the snake. He also ensured that passers-by maintained a distance.

He shared that when NParks personnel arrived, the snake had camouflaged itself in the bushes.

The NParks personnel then had to take some time to look for the reptile.

When the snake was found, the personnel tugged at the snake to get it out of the bushes - which Tim described as a 'tug of war'.

He also expressed his thanks to the NParks personnel for their expertise and dedication in capturing the snake. 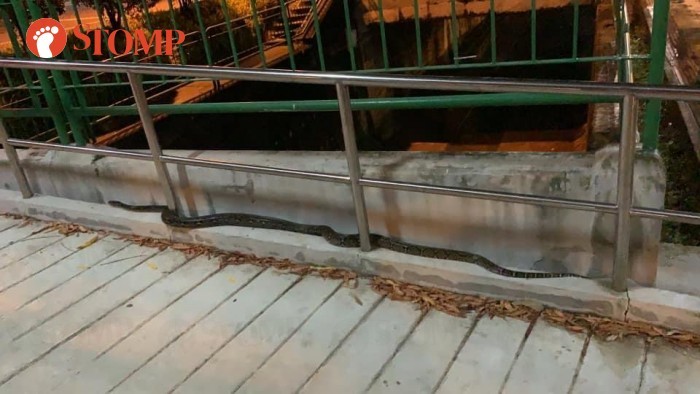 In response to a Stomp query, Mr Kalai Vanan, deputy chief executive officer of the Animal Concerns Research and Education Society (Acres) said: "It is great that the member of public alerted NParks for the reticulated python. The python should be eventually released back into the wild.

"Our drainage and canal systems are like roads for the pythons. They use them to move around and ambush rats that are usually found in the drainage networks.

"The recent rainy weather may be attributing to increased python sightings as the drains get flooded.

"Snakes have been part of our urban wildlife for a long time as they help to keep rodent populations in check."

Mr How Choon Beng, Director of Wildlife Management and Outreach at NParks, told Stomp in a statement: "On Sunday (Sep 13), NParks contractors responded to a call about a reticulated python that was spotted in Jurong West.

"The python was caught and sent to Wildlife Reserves Singapore for a health assessment where it was found to be in good health, and will be relocated to a forested area.

"The reticulated python is native to Singapore and is occasionally encountered in urban areas.

"Pythons play an important role in regulating the ecosystem by naturally keeping the population of pests, such as rodents, low.

"Snakes are generally shy creatures and will try to slither away from humans. Snakes usually will not attack unless they are disturbed or provoked.

"If you see a live snake, do keep calm and observe it from a safe distance. If you encounter a snake in your home or in urban areas, you can call the Animal Response Centre at 1800-476-1600.

"More on what to do if you see a snake can be found in the advisory here: https://www.nparks.gov.sg/gardens-parks-and-nature/dos-and-donts/animal-..."